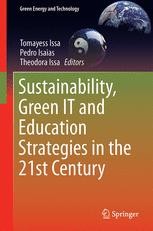 Sustainability, Green IT and Education Strategies in the Twenty-first Century

This work presents and discusses the latest approaches and strategies for implementing Sustainability and Green IT into higher education and business environments. Following the global financial crisis in 2007/2008, businesses began to struggle coping with the increased IT/IS cost and their environmental footprint. As a consequence, action by universities to incorporate sustainability and ‘Green IT’ as parts of their teaching and learning materials, acknowledging their importance for global and local businesses, is being increasingly implemented. The book addresses the cooperation and coordination between academics and practitioners needed in order to achieve the changes required to obtain sustainability.

Intended for researchers, lecturers and post-graduate students, as well as professionals in the Information Society and ICT and education sectors, and policy makers.

Tomayess Issa is a senior lecturer at the School of Information Systems at Curtin University, Australia.   Tomayess completed her doctoral research in Web development and Human Factors. As an academic, she is also interested in establishing teaching methods and styles to enhance the students’ learning experiences and resolve problems that students face. Tomayess Issa Conference and Program Co-Chair of the IADIS International Conference on Internet Technologies and  Society and IADIS  International Conference on International Higher Education. Furthermore, she initiated the IADIS  conference for Sustainability, Green IT and Education. Currently, she conducts research locally and globally in information systems, Human-Computer Interaction, Usability, Social Networking, Teaching and Learning, Sustainability, Green IT and Cloud Computing. Tomayess participated in a couple of conferences and published her work in several peer-reviewed journals, books, book chapters, papers and research reports Tomayess Issa is a Project leader in the  International  research  network (IRNet-EU (Jan2014 – Dec 2017))  to study and develop new  tools  and methods for advanced pedagogical science in the field of ICT instruments, e-learning and intercultural competences and she is a senior research member of ISRLAb (Information Society Research Lab) from International Association for Development of the Information Society. Tomayess is a member of eLmL Steering Committee conference and member of the local committee of WWW2017 conference, and chair and Coordinator for the special track: SST2017: Sustainability and Smart Technology Workshop in WWW2017 conference. Furthermore, Tomayess is a senior research member in ISR-Lab and member in the International Association for Development of the Information Society) Scientific Advisory Board.

Pedro Teixeira Isaias is an associate professor at The University of Queensland, Brisbane, Australia. He teaches topics in Management Information Systems (MIS). He has a background in MIS, having obtained a Doctorate in Information Management (Information and Decision Systems speciality) in 2002.
Previously he was associate professor at the Universidade Aberta (Portuguese Open University) in Lisbon, Portugal, responsible for several courses and director of the master degree program in Management / MBA. In the past he was director of master degree program in Electronic Commerce and Internet for 10 years. He has also been invited associate professor at ISEG - Lisbon School of Economics and Management in Portugal. He has taught postgraduate and undergraduate courses in Decision Support Systems, Data Mining, Business Intelligence, E-Marketing, E-Business, CRM and ERPs, Applied Project [MIS], Strategy in the Digital Context, and Research Methods in Business. He has supervised successfully to master and PhD completion more than 60 students in MIS and related areas.
Author of several books, book chapters, papers and research reports, all in the information systems area, he has headed several conferences and workshops within the mentioned area. He has also been responsible for the scientific coordination of several EU funded research projects. He is also member of the editorial board of several journals and program committee member of several conferences and workshops. At the moment he conducts research activity related to E-Commerce and E-Business, Learning Technologies, Information Systems in general, and WWW related areas.

Theodora Issa is a Senior Lecturer in the School of Management at Curtin University. She is the recipient of the Emerald/European Fund for Management Development 2010 Outstanding Research Award for her PhD thesis under the title ‘Ethical mindsets, aesthetics and spirituality: a mixed-methods approach analysis of the Australian services sector’. Theodora holds the title of Curtin Business School’s ‘New Researcher of the Year’ that was bestowed on her in 2010. Theodora is the recipient of multi awards and grants from the faculty, university and external bodies. She has published and continues to publish research work on business ethics, sustainability, technology, social media, corporate social responsibility, and higher education. Currently, Theodora is conducting her post-doctoral research on ethical mindsets, spirituality and aesthetics and currently working on a manuscript for a book on ‘Ethical Mindsets: A Comparative Study’ for publication with Springer, Switzerland. Theodora is a co-researcher in projects on sustainable development and business strategies, cloud computing, green IT and sustainability, corruption resistance, misconduct, social media and social awareness. Theodora is a member of the ‘Sustainability and Leadership Research Network (SLRN)’. Theodora is also a member in the International research network (IRNet) for study and development of new tools and methods for advanced pedagogical science in the field of ICT instruments, e-learning and intercultural competences with some twenty scholars from Europe.Theodora is an Associate Editor, and a member of editorial committees of international journals and a member of organising committees of international conferences, also a reviewer of journals such as the Journal of Business Ethics. Theodora holds memberships in several local and international bodies including Australia and New Zealand Academy of Management (ANZAM), American Academy of Management (AOM), and European Business Ethics Network, UK (EBEN-UK). Theodora is one of the webmasters of her community's website (since 1995) and is one of the editors of the weekly bulletin since 1995. In 2012 Theodora was appointed a delegate to the 10th Assembly, Busan, South Korea, of the World Council of Churches (WCC) representing her Syrian Orthodox Church. In November 2013, and during this assembly’s sessions, Dr Theodora Issa was elected a member of the Central Committee of the WCC representing the Syrian Orthodox Patriarchate of Antioch and all the East. It is worthwhile noting that this is the first time a female member has been elected to this position on behalf of the Syrian Orthodox Church. In July 2014 Theodora was nominated by the church and later voted as a member of the ‘Education and Ecumenical Formation (EEF) Commission of the WCC. In June 2016 Theodora was nominated by the church and later voted as a member of the Permanent Committee on Consensus and Collaboration (PCCC).

“It is a compilation of texts dealing with the mission of sustainability. Integration of texts from various authors into one edition is always hard work, and the editor plays a crucial role in this process. … it is strongly recommended to universities and the IT community, who should understand the premise that businesses and universities should work together in green IT deployment.” (F. J. Ruzic, Computing Reviews, May, 2018)