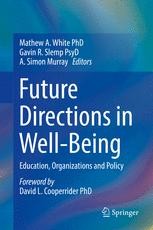 This book is a collection of essays advancing the discourse in well-being science, authored by key thought leaders in positive psychology and its variants, including positive education, character education, and positive organizational scholarship. The authors address topics such as the next big ideas in well-being research and practice, potential strategies , as well as current gaps and limitations of the field. This book will be of particular interest for policy makers, educators and practitioners, as well as researchers.

Mathew A. White PhD is Director of Wellbeing at St Peter’s College – Adelaide where he serves on the Senior Leadership Team. As an academic, Mathew is a Principal Fellow and Associate Professor in the Melbourne Graduate School of Education - University of Melbourne, and an Affiliate in Cambridge University’s Wellbeing Institute. He has presented his research in the science of positive psychology and its evidence-based practice internationally. Mathew has authored journal articles, 20 book chapters and coedited two other scholarly volumes within the past three years. These books include Evidence-based Approaches to Positive Education in Schools: Implementing a Strategic Framework for Well-being in Schools (Springer, 2015) and Flourishing in Faith: Theology Encountering Positive Psychology (Wipf & Stock, 2017). He is currently writing a book on teaching character strengths in literature (Sense). Mathew is a member of the Education Committee of Adelaide’s largest residential university college, St Mark’s College. In 2017 he was awarded the Australian Council for Educational Leaders South Australian Leadership Medal. He is a Fellow of the Australian College of Educators, the peak professional association which represents educators across all sectors and systems in 2016.

Gavin R. Slemp Psy.D is a lecturer, academic, and Associate Director of Undergraduate Programs in the Centre for Positive Psychology, University of Melbourne.  Here he teaches and coordinates the undergraduate breadth sequence in positive psychology – subjects which have been voted as among the most popular in the university by the students.  With a Doctor of Organizational Psychology and as a registered Organisational Psychologist (AHPRA), Gavin’s research interests are primarily in the areas of employee wellbeing, autonomous motivation, the effects of people becoming active crafters of their work, positive education, and cross-cultural psychology. Before becoming an academic, Gavin worked in consulting in the area of Human Resources Advisory in Australia and the Asia-Pacific.  In this role his work was primarily on the leadership development of executive teams and their direct reporting lines, as well as the design and implementation of training and development programs in large organisations.

Simon Murray is the 14th Headmaster of St Peter’s College, Adelaide – one of Australia’s oldest independent schools, with over 1467 students and 250 staff. He has had 30 years of leadership experience in education. Prior to his appointment to St Peter’s College, Simon was Headmaster of Canberra Grammar School and Bunbury Cathedral Grammar School. Simon was elected Chair of Association of Heads of Independent School of Australia from 2009 – 2011, representing over 390 member schools. He is a past Board member of the Independent Schools Council of Australia. He was appointed a Fellow of the Australian College of Educators in 2008 for his leadership in the independent school sector, and he is a Fellow of the Australian Institute of Management. Simon has presented at national and international conferences on wellbeing, leadership, cultural change, and future directions in education. He was the St Peter’s College representative for Dr. Seligman’s role as Adelaide’s Thinker in Residence – Department of the Premier and Cabinet. Simon was one of thirty leaders in education invited to participate in a Positive Education Summit on Wellbeing at 10 Downing Street. He is the foundation Chairman and a board member of the Positive Education Schools Association (PESA), a board member of the International Positive Education Network (IPEN), a council member of Adelaide’s largest residential university college, St Mark’s College, and an appointed member of the diocesan council in the Anglican Diocese of Adelaide.