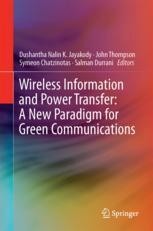 Dushantha Nalin K. Jayakody received the Ph. D. degree in Electronics, Electrical and Communications Engineering in 2014, from the University College Dublin, Ireland. He received his MSc degree in Electronics and Communications Engineering from the Department of Electrical and Electronics Engineering, Eastern Mediterranean University, Turkey in 2010 (under the University full graduate scholarship) and ranked as the first merit position holder of the department, and B. E. electronics engineering degree (with first-class honors) from Pakistan in 2009 and was ranked as the merit position holder of the University  (under PTAP Scholarship.). From 2014 - 2016, he was a Postdoc Research  Fellow at the institute of Computer Science,  University of Tartu, Estonia and Department of Informatics, University of Bergen, Norway. From summer 2016, he is a faculty member at the Department of Software Engineering, Institute of Cybernetics, National Research Tomsk Polytechnic University, Russia where he also serves as the Director of Tomsk Infocom Lab. Dr.  Jayakody is a Member of IEEE and he has served as session chair or technical program committee member for various international conferences, such as IEEE PIMRC  2013/2014, IEEE WCNC 2014/2016, IEEE  VTC 2015 etc.  He currently serve as a lead guest editor for Elsevier Physical Communications Journal.

Symeon Chatzinotas (S’06–M’09–SM’13) is currently the Deputy Head of the SIGCOM Research Group, Interdisciplinary Centre for Security, Reliability, and Trust, University of Luxembourg, Luxembourg. In the past, he has worked on numerous R&D projects for the Institute of Informatics Telecommunications, National Center for Scientific Research Demokritos, Institute of Telematics and Informatics, Center of Research and Technology Hellas, and Mobile Communications Research Group, Center of Communication Systems Research, University of Surrey, Surrey, U.K. He has received the M.Eng. degree in telecommunications from Aristotle University of Thessaloniki, Thessaloniki, Greece, and the M.Sc. and Ph.D. degrees in electronic engineering from the University of Surrey, Surrey, U.K., in 2003, 2006, and 2009, respectively.  Dr. Chatzinotas has more than 200 publications, 1600 citations and an H-Index of 22 according to Google Scholar. He is the co-recipient of the 2014 Distinguished Contributions to Satellite Communications Award, and Satellite and Space Communications Technical Committee, IEEE Communications Society, and CROWNCOM 2015 Best Paper Award. His research interests include multiuser information theory, co-operative/cognitive communications and wireless networks optimization.

John S. Thompson (SM’13) received the B.Eng. and Ph.D. degrees from the University of Edinburgh, Edinburgh, U.K., in 1992 and 1996, respectively. He holds a Personal Chair in Signal Processing and Communications with the School of Engineering, University of Edinburgh, Edinburgh, U.K. He specializes in antenna array processing, cooperative communications systems, and energy-efficient wireless communications. He has published in excess of three hundred papers on these topics, including one hundred journal paper publications. He is currently the project coodinator for the EU Marie Curie International Training Network project ADVANTAGE, which studies how communications and power engineering can provide  future “smart grid” systems.  He was deputy academic coordinator for Mobile Virtual Centre of Excellence Green Radio project and now leads the UK SERAN project for 5G wireless research. He is an editor for the Green Communications and Computing Series that appears regularly in IEEE Communications Magazine. In January 2016, he was elevated to Fellow of the IEEE for contributions to to multiple antenna and multi-hop wireless communications. He was also listed as a highly cited scientist by Thomson Reuters in 2016.

Salman Durrani received the B.Sc. (1st class honours) degree in Electrical Engineering from the University of Engineering & Technology, Lahore, Pakistan in 2000. He received the PhD degree in Electrical Engineering from the University of Queensland, Brisbane, Australia in Dec. 2004. He has been with the Australian National University, Canberra, Australia, since 2005, where he is currently Senior Lecturer in the Research School of Engineering, College of Engineering & Computer Science.  His research interests are in wireless communications and signal processing, including machine-to-machine and device-to-device communication, wireless energy harvesting systems, stochastic geometry modelling of finite area networks and synchronization in communication systems.  He has co-authored more than a 100 publications to date in refereed international journals and conferences. He was a recipient of the 2016 IEEE ComSoc Asia Pacific Outstanding Paper Award. He was the Chair of the ACT Chapter of the IEEE Signal Processing and Communications Societies from 2015 to 2016. He currently serves as an Editor of the IEEE TRANSACTIONS ON COMMUNICATIONS. He is a Senior Member of IEEE, USA, a Member of Engineers Australia and a Senior Fellow of The Higher Education Academy, UK.