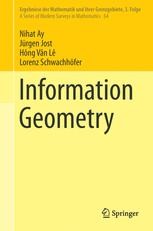 The book provides a comprehensive introduction and a novel mathematical foundation of the field of information geometry with complete proofs and detailed background material on measure theory, Riemannian geometry and Banach space theory.  Parametrised measure models are defined as fundamental geometric objects, which can be both finite or infinite dimensional. Based on these models, canonical tensor fields are introduced and further studied, including the Fisher metric and the Amari-Chentsov tensor, and embeddings of statistical manifolds are investigated.

This novel foundation then leads to application highlights, such as generalizations and extensions of the classical uniqueness result of Chentsov or the Cramér-Rao inequality.  Additionally, several new application fields of information geometry are highlighted, for instance hierarchical and graphical models, complexity theory, population genetics, or Markov Chain Monte Carlo.

Nihat Ay studied mathematics and physics at the Ruhr University Bochum and received his Ph.D. in mathematics from the University of Leipzig in 2001. He was a Postdoc at the Santa Fe Institute and at the Redwood Center for Theoretical Neuroscience, UC Berkeley.  Since 2005, he has been group leader at the Max Planck Institute for Mathematics in the Sciences in Leipzig, heading the Information Theory of Cognitive Systems group. His research interests are information geometry, complexity and information theory, mathematical learning theory, embodied cognitive systems, graphical models and causality, and robustness theory. Nihat Ay is Professor at the Santa Fe Institute and honorary Professor of information geometry at the University of Leipzig.

Jürgen Jost studied mathematics, physics, economics and philosophy in Bonn 1975-1980. He received his Ph.D. in mathematics in 1980, and was a Postdoc at IAS Princeton, UC San Diego, CMA Canberra and Bonn, a Professor at Ruhr University Bochum 1984-1996, and has been a Director of the Max Planck Institute for Mathematics in the Sciences, Leipzig, since 1996. He is an Honorary Professor of Leipzig University, external member of the Santa Fe Institute. He received the DFG Leibniz Award in 1993, and an ERC advanced grant in 2010. His research interests are Riemannian geometry, geometric analysis, dynamical systems, information theory, network analysis, mathematical biology and neurobiology, mathematical economics and complex systems theory.

Lorenz Schwachhöfer studied mathematics and computer science in Darmstadt, New Orleans (Tulane) and Philadelphia (UPenn) where he received his Ph.D. in 1992. He was a Postdoc in St.Louis (Washington Univ.), Bonn (Max Planck Institute for Mathematics) and Leipzig University where he completed his habilitation in 1998. He was a Professor (Chargé de cours) at ULB Brussels (2000-2003), and since 2003 he has been a full Professor at TU Dortmund University. In 2010, he received the Royal Academy of Science (Belgium) E. Catalan prize. His main research interests are in differential geometry and differential topology, representation theory and information geometry.

“The monograph is very timely and welcome. It will become a standard textbook and reference for the field. It is not only accessible and useful for scientists who work in probability or statistics, but also for all graduate students of mathematics.” (Andreas Knauf, Jahresbericht der Deutschen Mathematiker-Vereinigung, Vol. 121, 2019)
“This book also provides a general framework that integrates the differential geometry into the functional analysis, it is an easy read for graduate students in mathematical statistics. I believe that it could be standard reference for information geometry.” (Etsuo Kumagai Hamada, Mathematical Reviews, June, 2018)

“The book as well as [Shun-ichi Amari’s Information Geometry and its Applications] will remain standard textbooks on information geometry in the foreseeable future and will become the classics in the arena afterwards.” (Hirokazu Nishimura, zbMATH 1383.53002)