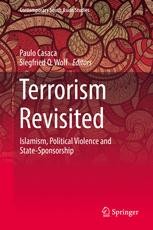 This book develops a conceptual approach to understanding the face of contemporary terrorism as manifested in the recent attacks in Mumbai and Paris. By analyzing the historical evolution of terrorism and by offering case studies on different forms of terrorism in South Asia and elsewhere, the authors shed new light on the political strategies behind terrorist attacks, as well as on the motivations of terrorists. The case studies explore the redefinition of terrorism by the Iranian Islamic revolution, the spread of terrorism in Sunni Islam, the national jihadism in Pakistan, anti-Semitism as a main factor behind fanatical terrorist ideologies, and the case of the Tamil Tigers.

"Redefining terrorism is a dynamic story that provides readers with intrigue and clarity to the ever-evolving threats that we face as a nation and as a global community. The authors masterfully navigate through the intricate maze of global terrorism bringing an overwhelming dose of reality through his usage of real life, gripping experiences. Through this book military and intelligence analysts and policy makers alike will gain first-hand knowledge about not only what the world looks like today but a glimpse into the future."US Congressman Pete Sessions

Paulo Casaca, Editor of SADF Book Series, is the founder and Executive Director of SADF, South Asia Democratic Forum. He is also the founder of the international cooperation association ARCHumankind, "Alliance to Renew Co-operation among Humankind”, of the “Euro Reform Initiative” and of the consultancy company on sustainable development, Lessmeansmore, Land and Energy Sustainable Systems. He was a fellow of the German Marshall Fund of the US in the first semester of 2010. Mr Casaca was a Member of the European Parliament from 1999 to 2009 where he chaired the delegation for relations with NATO Parliamentary Assembly. He is the author of several books and reports on economics and international politics.

Dr. Siegfried O. Wolf is Senior Researcher (member) at the South Asia Institute (SAI), Heidelberg University, and Director of Research at South Asia Democratic Forum (SADF, Brussels). He is currently a visiting fellow at the National University of Science and Technology (NUST, Islamabad), an affiliated researcher at the Pakistan Security Research Unit (PSRU, Durham University). Formerly, he was a research fellow at IPW and Centre de Sciences Humaines (New Delhi, India). In addition to this, he worked as a consultant for the Federal Ministry for Economic Cooperation and Development (BMZ), Germany, he is member of the external expert group of the Afghanistan-Pakistan Task Force, Federal Foreign Office, Germany, and a political commentator for international media.