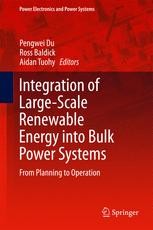 From Planning to Operation

This book outlines the challenges that increasing amounts of renewable and distributed energy represent when integrated into established electricity grid infrastructures, offering a range of potential solutions that will support engineers, grid operators, system planners, utilities, and policymakers alike in their efforts to realize the vision of moving toward greener, more secure energy portfolios. Covering all major renewable sources, from wind and solar, to waste energy and hydropower, the authors highlight case studies of successful integration scenarios to demonstrate pathways toward overcoming the complexities created by variable and distributed generation.

Dr. Pengwei Du is lead engineer – renewable integration with the Electric Reliability Council of Texas (ERCOT). Prior to this, he was a senior research engineer with Pacific Northwest National Laboratory (PNNL). Dr. Du has over 10-year extensive experiences in simulation, modeling, protection and control, renewable energy integration, demand response and market design. Dr. Du was also an adjunct professor at Washington State University (Tri-Cities) in 2012, and has been adjunct faculty at University of Texas (Austin) since 2016. Dr. Du is the recipient of IEEE PES Power System Dynamic Performance Committee Prize Paper Award in 2016. Dr. Du is associated editor of International Transactions on Electrical Energy Systems and IET Generation, Transmission & Distribution, and vice-chair for Bulk Power System Planning Subcommittee, IEEE Power & Energy Society since 2016.

Dr. Ross Baldick is a Professor in the Department of Electrical & Computer Engineering at The University of Texas at Austinand holds the Leland Barclay Fellowship in Engineering. He received his B.Sc. and B.E. degrees from the University of Sydney, Australia and his M.S. and Ph.D. from the University of California, Berkeley. From 1991-1992 he was a post-doctoral fellow at the Lawrence Berkeley Laboratory. In 1992 and 1993 he was an assistant professor at Worcester Polytechnic Institute. In 1994, Dr. Baldick received a National Science Foundation Young Investigator Award. Dr. Baldick has published over forty refereed journal articles and has research interests in a number of areas in electric power. His current research involves optimization and economic theory applied to electric power system operations, the public policy and technical issues associated with electric transmission under deregulation, and the robustness of the electricity system subject to terrorist interdiction.

Aidan Tuohy is a project manager/technical lead at the Electric Power Research Institute. He received his PhD degree in electrical engineering from University College Dublin, Ireland, in 2009. He has worked at Electric Power Research Institute (EPRI) since 2010 as technical lead in the program on bulk system integration of variable generation. His current research interests include power system flexibility to integrate variable generation, integration of distributed energy resources on the bulk system, and variable generation forecasting for system operations. Prior to joining EPRI, he worked with the International Energy Agency on their Grid Integration of Variable Generation Project. He chairs the IEEE Working Group on Power System Operations for High Variable Generation Penetration.