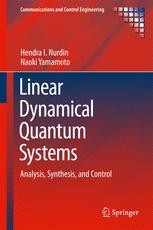 Researchers and graduates studying systems and control theory, quantum probability and stochastics or stochastic control whether from backgrounds in mechanical or electrical engineering or applied mathematics will find this book to be a valuable treatment of the control of an important class of quantum systems. The material presented here will also interest physicists working in optics, quantum optics, quantum information theory and other quantum-physical disciplines.

Dr. Hendra I. Nurdin holds a bachelor's degree in electrical engineering from Institut Teknologi Bandung, Indonesia, a master's degree in engineering mathematics from the University of Twente, the Netherlands, and a PhD degree in engineering and information science from the Australian National University (ANU) in 2007. From 2007 to 2011 he was a Research Fellow and then an Australian Research Council (ARC) APD Fellow at the ANU before joining the University of New South Wales (UNSW) Australia in 2012, where he has since been a Senior Lecturer. Dr Nurdin has held two ARC Discovery Project grants and is a Senior Member of the Institute of Electrical and Electronic Engineers (IEEE). He is the author or co-author of more than 30 peer-reviewed journal articles and a similar number of conference proceedings papers. His research interests include quantum systems, quantum feedback control, stochastic systems and stochastic control, and the application of control theory to power systems.

Naoki Yamamoto received the B.S. degree in engineering, the M.S. degree in information physics, and the Ph.D. degree in computing from the University of Tokyo, Tokyo, Japan, in 1999, 2001, and 2004, respectively. From 2003 to 2007 he was a Research Fellow of the Japan Society for the Promotion of Science. From 2004 to 2006 he was a Visiting Researcher at the California Institute of Technology, Pasadena, and from 2007 to 2008 he was a Research Fellow at Australian National University, Canberra. He is currently an Associate Professor at Keio University, Yokohama, Japan. He is an author or co-author of more than 40 peer-reviewed journal articles and conference proceedings papers. His current research interests are in quantum engineering including control, system identification, and filtering, in the quantum information context.