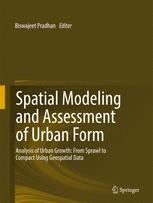 This book discusses the application of Geospatial data, Geographic Information System (GIS) and Remote Sensing (RS) technologies in analysis and modeling of urban growth process, and its pattern, with special focus on sprawl and compact form of urban development. The book explains these two kinds of urban forms (sprawl and compact urban development) in detail regarding their advantages, disadvantages, indicators, assessment, modeling, implementation and their relationship with urban sustainability. It confirms that the proposed modeling approaches, geospatial data and GIS are very practical for identifying urban growth, land use change patterns and their general trends in future. The analyses and modeling approaches presented in this book can be employed to guide the identification and measurements of the changes and growth likely to happen in urban areas. In addition, this book can be helpful for town planning and development in order to design urban areas in a compact form and eventually sustainable manner.

Prof. Dr. Biswajeet Pradhan (University Putra Malaysia, Malaysia)
Dr. Pradhan received the B.Sc. degree with honors from Berhampur University (India), the M.Sc. degree from the Indian Institute of Technology (IIT) in Bombay (India), and the M.Tech. degree in Civil Engineering from the IIT in Kanpur (India) and Dresden University of Technology (Germany). He received the Ph.D. degree in GIS and Geomatics Engineering from the University Putra Malaysia. From 2008 to 2010 he was a recipient of the Alexander von Humboldt Research Fellowship from Germany. In 2011, he received his Habilitation in Remote Sensing from Dresden University of Technology (Germany). Since March 2015, he is serving as the Humboldt Ambassador Scientist for the Alexander Von Humboldt Foundation (Germany). Dr. Pradhan is also the recipient of the prestigious German Academic Exchange Research (DAAD) Fellowship Award, Saxony State Fellowship from 1999 to 2002, Keith Atherton Research Award, and Georg Forster Research Award from German Government. He is currently Faculty Member of Dept. of Civil Engineering, University Putra Malaysia. He has more than sixteen years of teaching, research, consultancy and industrial experience. Out of his more than 430 articles, more than 280 have been published in science citation index (SCI/SCIE) technical journals. He has written two books in GIS data compression and disaster management and edited three volumes, and written 12 book chapters. He specializes in Remote Sensing, GIS application, and soft computing techniques in natural hazard and environmental problems. His published work has been widely cited by his peers with more than 4800 citations in SCOPUS database. His H-index is 48. He has completed 21 research projects. Dr. Pradhan is a member of many professional bodies such as Committee of Space Research (COSPAR), Senior Member of IEEE, United Nations Outer Space Research Programme (UNOOSA) and many more. He is currently the Chair of the IEEE-GRSS Malaysia Chapter. He sits as board member of many national programs in Malaysia and South-East Asia. He is a regular reviewer for many international bodies alike Dutch Research Council, European Science Foundation, Austrian Science Foundation, Research Council UK (RCUK) and many more. He has been also active with teaching and supervising of many Ph.D., MSc. and undergraduate students. Dr. Pradhan has widely travelled abroad visiting more than 60 countries to present his research findings. Countries involved are Germany, USA, Netherlands, UK, Switzerland, Turkey, South Korea, Japan, Indonesia, Thailand and many more.
He is listed as the World’s most Highly Cited researcher by ISI Thomson Reuter’s Report in 2016 as one of the world’s most influential minds.