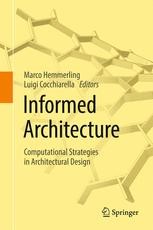 This book connects the different topics and professions involved in information technology approaches to architectural design, ranging from computer-aided design, building information modeling and programming to simulation, digital representation, augmented and virtual reality, digital fabrication and physical computation. The contributions include experts’ academic and practical experiences and findings in research and advanced applications, covering the fields of architecture, engineering, design and mathematics.

What are the conditions, constraints and opportunities of this digital revolution for architecture? How do processes change and influence the result? What does it mean for the collaboration and roles of the partners involved. And last but not least: how does academia reflect and shape this development and what does the future hold? Following the sequence of architectural production - from design to fabrication and construction up to the operation of buildings - the book discusses the impact of computational methods and technologies and its consequences for the education of future architects and designers. It offers detailed insights into the processes involved and considers them in the context of our technical, historical, social and cultural environment. Intended mainly for academic researchers, the book is also of interest to master’s level students.
Show all
About the authors

Luigi Cocchiarella (1965), architect, PhD, is associate professor at the Milan Polytechnic University, Department of Architecture and Urban Studies, School of Architecture Urban Planning Construction Engineering.
His research and educational interests focus on architectural representation and visual education in relation to the design processes, and particularly on descriptive and projective geometry and their nexus with art, science, techniques, eidomatics.
He is member of the International Society for Geometry and Graphics (ISGG), the World Academy of Art and Science (WAAS), the Unione Italiana Disegno (UID), the Istituto Lombardo Accademia di Scienze e Lettere, and the Istituto di Studi Superiori dell’Insubria “Gerolamo Cardano”.
In 2015 he published with Springer the three volumes The Visual Language of Techniques Between Science and Art, inspired by the homonymous cycle of seminars he organized for the 150th anniversary of the Politecnico di Milano.