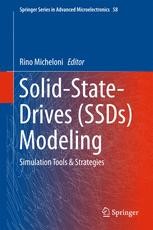 This book introduces simulation tools and strategies for complex systems of solid-state-drives (SSDs) which consist of a flash multi-core microcontroller plus NAND flash memories. It provides a broad overview of the most popular simulation tools, with special focus on open source solutions. VSSIM, NANDFlashSim and DiskSim are benchmarked against performances of real SSDs under different traffic workloads. PROs and CONs of each simulator are analyzed, and it is clearly indicated which kind of answers each of them can give and at a what price. It is explained, that speed and precision do not go hand in hand, and it is important to understand when to simulate what, and with which tool. Being able to simulate SSD’s performances is mandatory to meet time-to-market, together with product cost and quality.

Over the last few years the authors developed an advanced simulator named “SSDExplorer” which has been used to evaluate multiple phenomena with great accuracy, from QoS (Quality Of Service) to Read Retry, from LDPC Soft Information to power, from Flash aging to FTL. SSD simulators are also addressed in a broader context in this book, i.e. the analysis of what happens when SSDs are connected to the OS (Operating System) and to the end-user application (for example, a database search). The authors walk the reader through the full simulation flow of a real system-level by combining SSD Explorer with the QEMU virtual platform. The reader will be impressed by the level of know-how and the combination of models that such simulations are asking for.
Show all
About the authors

Rino Micheloni is Fellow at Microsemi Corporation where he currently runs the Non-Volatile Memory Lab in Milan, with special focus on NAND Flash. Prior to joining Microsemi, he was Fellow at PMC-Sierra, working on NAND Flash characterization, LDPC, and NAND Signal Processing as part of the team developing Flash controllers for PCIe SSDs. Before that, he was with IDT (Integrated Device Technology) as Lead Flash Technologist, driving the architecture and design of the BCH engine in the world’s 1st PCIe NVMe SSD controller. Early in his career, he led Flash design teams at STMicroelectronics, Hynix, and Infineon; during this time, he developed the industry’s first MLC NOR device with embedded ECC technology and the industry’s first MLC NAND with embedded BCH.

Rino is IEEE Senior Member, he has co-authored more than 50 publications, and he holds 278 patents worldwide (including 124 US patents). He received the STMicroelectronics Exceptional Patent Award in 2003 and 2004, and the Qimonda IP Award in 2007.