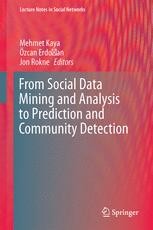 From Social Data Mining and Analysis to Prediction and Community Detection

This book presents the state-of-the-art in various aspects of analysis and mining of online social networks. Within the broader context of online social networks, it focuses on important and upcoming topics of social network analysis and mining such as the latest in sentiment trends research and a variety of techniques for community detection and analysis. The book collects chapters that are expanded versions of the best papers presented at the IEEE/ACM International Conference on Advances in Social Networks Analysis and Mining (ASONAM’2015), which was held in Paris, France in August 2015. All papers have been peer reviewed and checked carefully for overlap with the literature. The book will appeal to students and researchers in social network analysis/mining and machine learning.

He has published over 70 papers in refereed international journals and conferences. His primary work and research interests are in the areas of data mining, social network analysis and mining, multi-agent systems, machine learning, and soft computing.

Jon Rokne is a Full Professor and former Head in the Department of Computer Science at the University of Calgary. He has published extensively in mathematics and computer science including co-editing the Encyclopedia of Social Network Analysis and Mining. He was Vice-President IEEE, PSPB in 2009 and 2010 and is currently active on the IEEE Big Data Initiative.

Graduated from Ankara University Faculty of Political Science Department of Economics and Finance. He was the Hani District Governor of Diyarbakir in 1988 and Cinar District Governor of Diyarbakir in 1989. During the years 1990 to 1992, in which problems of the Gulf War were being experienced he, again, was in Diyarbakir as the Deputy Governor of the State of Emergency. He worked at the State Supervisory Board at studies of the measures for eliminating the terrorist environment during 1996 and 1997. He again took roles at the 55th Government Ministry for the socio-economic and cultural development of Eastern and Southeastern Anatolia Regions, where terrorism affected the most. During this task, he especially worked on the projects and studies such as the restructuring of the East and Southeast, future of Emergency Region Governorate, Temporary Village Guard System (GKK), implementation of the repentance law, return to village and rehabilitation project, implementation of emergency assistance programs in the regions and the development of border trade.

He got his PhD from Ankara University Institute of Social Sciences, Social Science in Environmental Sciences Faculty. Including the Journal of Econometrics, his articles have been published in various journals. Currently he serves as the Chief Inspector at the Board of Inspection of the Ministry of Interior Services.