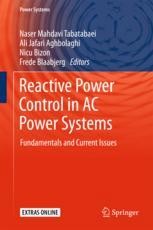 This textbook explores reactive power control and voltage stability and explains how they relate to different forms of power generation and transmission. Bringing together international experts in this field, it includes chapters on electric power analysis, design and operational strategies. The book explains fundamental concepts before moving on to report on the latest theoretical findings in reactive power control, including case studies and advice on practical implementation students can use to design their own research projects.

Featuring numerous worked-out examples, problems and solutions, as well as over 400 illustrations, Reactive Power Control in AC Power Systems offers an essential textbook for postgraduate students in electrical power engineering. It offers practical advice on implementing the methods discussed in the book using MATLAB and DIgSILENT, and the relevant program files are available at extras.springer.com.

Naser Mahdavi Tabatabaei, was born in Tehran, Iran, 1967. He received the B.Sc. and the M.Sc. degrees from University of Tabriz (Tabriz, Iran) and the Ph.D. degree from Iran University of Science and Technology (Tehran, Iran), all in Power Electrical Engineering, in 1989, 1992, and 1997, respectively. Currently, he is a Professor in International Organization of IOTPE. He is also an academic member of Power Electrical Engineering at Seraj Higher Education Institute (Tabriz, Iran) and teaches power system analysis, power system operation, and reactive power control. He is the General Chair and Secretary of International Conference of ICTPE, Editor-in-Chief of International Journal of IJTPE and Chairman of International Enterprise of IETPE all supported by the OTPE. He has authored and co-authored of 7 books and book chapters in Electrical Engineering area in international publishers and more than 140 papers in international journals and conference proceedings. His research interests are in the area of power system analysis and control, power quality, energy management systems, ICT in power engineering and virtual e-learning educational systems. He is a member of the Iranian Association of Electrical and Electronic Engineers (IAEEE). Ali Jafari Aghbolaghi, was born in Zanjan, Iran in 1988. He received his B.Sc. from Abhar Branch, Islamic Azad University, Abhar, Iran in 2011 and his M.Sc. from Seraj Higher Education Institute, Tabriz in 2014, both in power electrical engineering. He is a member of the Scientific and Executive Committee of the International Conference on Technical and Physical Problems of Electrical Engineering (ICTPE) and the Scientific and Executive Secretaries of the International Journal on Technical and Physical Problems of Engineering (IJTPE) supported by the International Organization on of Technical and Physical Problems of Engineering (IOTPE). He is currently working as a geographic information system (GIS) technical specialist. He has published several papers on the application of intelligent algorithms in AC power systems in international conferences and journals. His research interests include the application of heuristic methods in power systems, reactive power control, uncertainties in power systems, smart grids, renewable energies, and power systems dynamics and control.
Nicu Bizon, obtained a degree in electronic engineering from the “Politehnica” University of Bucharest, Romania, in 1986, and his Ph.D. in automatic systems and control from the same university, in 1996. First, he worked in hardware design at Dacia Renault SA, Romania, and is currently a professor at the University of Pitesti, Romania, where he has been the dean of the Faculty of Electronics, Communication and Computers since 2012. He was also head of the University Research Department (2004–2008) and executive director of the Research Centre "Modeling and Simulation Processes and Systems" (2008–2012), where he was involved in several research projects in the field of green energy. He is the editor of seven books in the field of green energy, hybrid power sources and power converters. His current research interests include the broad area of nonlinear systems, on both dynamics and control applied in the green energy field. He has authored or co-authored over 150 papers in international journals and conference proceedings. He is the general chair and proceedings’ editor of the “Electronics, Computers and Artificial Intelligence - ECAI” conference and a member of the editorial/technical board of several international journals and conferences. He has been an IEEE member since 2006 and was the chair of the Management of Technical Activities for IEEE Romania Section (2012). He is recipient of the "Tudor Tanasescu" award of the Romanian Academy (2013).
Frede Blaabjerg, is an IEEE Fellow and Professor in power electronics and drives at Aalborg University, Department of Energy Technology, Denmark. His research interests include power electronics, power converters, adjustable speed drives, control theory, process control, power quality, power electronics reliability as well as renewable energy like solar power and wind energy. He has published more than 400 journal papers and is among the most 250 cited in Engineering according to Thomson Reuter in 2015 and 2016. He is the recipient of the IEEE William E. Newell Power Electronics award as well as a dozen of other awards.