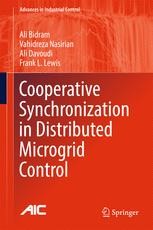 This book brings together emerging objectives and paradigms in the control of both AC and DC microgrids; further, it facilitates the integration of renewable-energy and distribution systems through localization of generation, storage and consumption. The control objectives in a microgrid are addressed through the hierarchical control structure.

After providing a comprehensive survey on the state of the art in microgrid control, the book goes on to address the most recent control schemes for both AC and DC microgrids, which are based on the distributed cooperative control of multi-agent systems. The cooperative control structure discussed distributes the co-ordination and optimization tasks across all distributed generators. This does away with the need for a central controller, and the control system will not collapse in response to the outage of a single unit. This avoids adverse effects on system flexibility and configurability, as well as the reliability concerns in connection with single points of failure that arise in traditional, centralized microgrid control schemes.
Rigorous proofs develop each control methodology covered in the book, and simulation examples are provided to justify all of the proposed algorithms. Given its extensive yet self-contained content, the book offers a comprehensive source of information for graduate students, academic researchers, and practicing engineers working in the field of microgrid control and optimization.

Ali Bidram received his Ph.D. degree from the University of Texas at Arlington in 2014. In his PhD, he was working on the distributed control of AC microgrids. Currently, he is a principal consultant in Quanta Technology, Canada and working in the field of power systems protection, microgrid control and automation, and grid integration of renewable energy resources. His areas of expertise lie within the power system control and automation, microgrid control, power system protection, and distributed control of multi-agent systems. Ali Bidram is an associate editor of IEEE Transactions on Industry Applications. He was the recipient of 2014 N. M. Stelmakh student research award.

Vahidreza Nasirian has joined TeraDiode, Inc. in 2016 as High-power Electrical Engineer, where he is currently appointed as the Product Manager for high-power laser diode drivers. He received Ph.D. from the University of Texas at Arlington in 2015. His research interests include the modeling and control of power electronics, control development for microgrids, renewable/ sustainable energy systems, transportation electrification, and control of multi-agent dynamic systems. Dr. Nasirian received IEEE Power and Energy Society Prize Paper Award in Jul. 2016, Best Paper Award from IEEE Transactions on Energy Conversion in Dec. 2015, and Best Symposium Paper Award from 8th Int’l Symposium on Resilient Control Systems in Aug. 2015. He was also the recipient of the UT-Arlington Graduate Dissertation Fellowship for summer 2015, the Carrizo Oil and Gas Inc. Graduate Research Fellowship for 2011–2013, and Iranian National Elites Foundation Fellowship for 2008–2010.