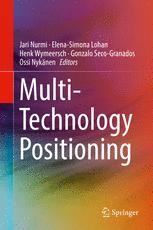 This book provides an overview of positioning technologies, applications and services in a format accessible to a wide variety of readers. Readers who have always wanted to understand how satellite-based positioning, wireless network positioning, inertial navigation, and their combinations work will find great value in this book. Readers will also learn about the advantages and disadvantages of different positioning methods, their limitations and challenges. Cognitive positioning, adding the brain to determine which technologies to use at device runtime, is introduced as well. Coverage also includes the use of position information for Location Based Services (LBS), as well as context-aware positioning services, designed for better user experience.

Jari Nurmi works as a Professor at Tampere University of Technology, Finland since 1999, in the Faculty of Computing and Electrical Engineering. He is working on embedded computing systems, wireless localization, positioning receiver prototyping, and software-defined radio. He held various research, education and management positions at TUT since 1987 and was the Vice President of the SME VLSI Solution Oy 1995-1998. Since 2013 he is also a partner and co-founder of Ekin Labs Oy, a research spin-off company commercializing technology for human presence detection, now headquartered in Silicon Valley as Radiomaze, Inc. He has supervised 19 PhD and over 130 MSc theses at TUT, and been the opponent or reviewer of 32 PhD theses for other universities worldwide. He is a senior member of IEEE, member of the technical committee on VLSI Systems and Applications at IEEE CAS, and board member of Tampere Convention Bureau. In 2011 he received IIDA Innovation Award, and in 2013 the Scientific Congress Award and HiPEAC Technology Transfer Award. He is a steering committee member of four international conferences, in the chairman position in two. He has edited 5 Springer books, and has published about 350 international conference and journal articles and book chapters. He has participated in the Marie Curie ITN network MULTI-POS as the network coordinator and scientist in charge.
Elena-Simona Lohan is an Associate Professor at the Department of Electronics and Communication Engineering at Tampere University of Technology (TUT). She is also a Visiting Professor at Universitat Autònoma de Barcelona, Spain. She received an M.Sc. degree in Electrical Engineering from Polytechnics University of Bucharest, Romania, in 1997, a D.E.A. degree (French equivalent of master) in Econometrics, at ´ Ecole Polytechnique, Paris, France, in 1998, and a Ph.D. degree in Telecommunications from TUT, in 2003. She has more than 170 international publications, 3 patents and 2 patent applications. She is serving as Associate Editor to IET Radar, Sonar and Navigation journal and to RIN Cambridge Journal of Navigation since 2013. Her current research interests include wireless location techniques based on signals of opportunity and cognitive spectrum sensing for positioning purposes. She has participated in the Marie Curie ITN network MULTI-POS as scientist in charge and equality officer.
Henk Wymeersch is a Professor in Communication Systems with the Department of Signals and Systems at Chalmers University of Technology, Sweden. Prior to joining Chalmers, he was a postdoctoral researcher from 2005 until 2009 with the Laboratory for Information and Decision Systems at the Massachusetts Institute of Technology. Henk Wymeersch obtained the Ph.D. degree in Electrical Engineering/Applied sciences in 2005 from Ghent University, Belgium. He served as Associate Editor for IEEE Communication Letters (2009-2013), IEEE Transactions on Wireless Communications (since 2013), and IEEE Transactions on Communications (since 2016). His current research interests include cooperative systems and intelligent transportation. He has participated in the Marie Curie ITN network MULTI-POS as scientist in charge.
Gonzalo Seco-Granados received the PhD degree on Telecommunications Engineering from Universitat Politècnica de Catalunya in 2000 and an MBA from IESE in 2002. From 2002 to 2005, he was member of the technical staff the European Space Agency, involved in the design of the Galileo system. Since 2006, he is Associate Professor at the Department of Telecommunications, Universitat Autònoma de Barcelona. He has been principal investigator of over 25 research projects. In 2014, he received an ICREA Academia fellowship. In 2015, he wasFulbright Visiting Scholar at University of California, Irvine. His research interests include the design of signals and reception techniques for satellite-based and terrestrial positioning systems, multi-antenna receivers and signal-level integrity. He has participated in the Marie Curie ITN network MULTI-POS as scientist in charge.
Ossi Nykänen works for M-Files, helping enterprises find, share, and secure documents and information. Dr. O. Nykänen also serves as an Adjunct Professor at Tampere University of Technology, Department of Mathematics. His long-term research interests include semantic computing, machine learning, information modeling and visualization, (computer-supported) mathematics, and the related applications. He is affiliated with many industrial and academic research networks, and is an advocate of international web standards. He has participated in the Marie Curie ITN network MULTI-POS as scientist in charge.