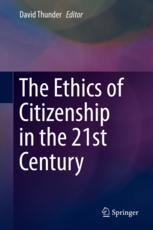 The Ethics of Citizenship in the 21st Century

This collection of essays offers thoughtful discussions of major challenges confronting the theory and practice of citizenship in a globalized, socially fragmented, and multicultural world. The traditional concept of citizenship as a shared ethnic, religious, and/or cultural identity has limited relevance in a multicultural world, and even the connection between citizenship and national belonging has been put in jeopardy by increasing levels of international migration and mobility, not to mention the pervasive influence of a global economy and mass media, whose symbols and values cut across national boundaries. Issues addressed include the ethical and practical value of patriotism in a globalized world, the standing of conscience claims in a morally diverse society, the problem of citizen complicity in national and global injustice, and the prospects for a principled acceptance by practising Muslims of a liberal constitutional order. In spite of the impressive diversity of philosophical traditions represented in this collection, including liberalism, pragmatism, Confucianism, Platonism, Thomism, and Islam, all of the volume’s contributors would agree that the crisis of modern citizenship is a crisis of the ethical values that give shape, form, and meaning to modern social life. This is one of the few edited volumes of its kind to combine penetrating ethical discussion with an impressive breadth of philosophical traditions and approaches.

Chapters “What is the use of an Ethical Theory of Citizenship?” and “An Ethical Defense of Citizenship” are available open access under a Creative Commons Attribution 4.0 International License via link.springer.com.

Dr David Thunder is a Research Fellow at the University of Navarra’s Institute for Culture and Society (Religion and Civil Society Project). Prior to this appointment, he held several research and teaching positions in the United States, including visiting assistant professor at Bucknell and Villanova and Postdoctoral Research Fellow in Princeton University’s James Madison Program. Dr Thunder earned his BA and MA in philosophy at University College Dublin, and his Ph.D. in political science at the University of Notre Dame. His research, which primarily engages the work of twentieth and twenty-first century political and moral philosophers, seeks to recover a more holistic and person-centered vision of human action and life in community with others, in the face of attempts by modern thinkers to isolate legal, economic, and political activity from broader concerns and values that affect the human person as such. Specific issues he has taken up in his writings include integrity and corruption in public life, our responsibilities toward the distant needy, the philosophical justification of human rights, and the challenge of building sustainable communities in individualistic cultures. In Citizenship and the Pursuit of the Worthy Life (Cambridge University Press, 2014), he makes the case that the modern separation between ethics and political morality is a dangerous error, and that democratic societies would be much better served by a more ethically integrated form of citizenship. Dr Thunder’s work has appeared in venues such as the American Journal of Political Science,