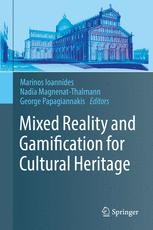 This volume on virtual and augmented reality (VR/AR) and gamification for cultural heritage offers an insightful introduction to the theories, development, recent applications and trends of the enabling technologies for mixed reality and gamified interaction in cultural heritage and creative industries in general. It has two main goals: serving as an introductory textbook to train beginning and experienced researchers in the field of interactive digital cultural heritage, and offering a novel platform for researchers in and across the culturally-related disciplines.

To this end, it is divided into two sections following a pedagogical model developed by the focus group of the first EU Marie S. Curie Fellowship Initial Training Network on Digital Cultural Heritage (ITN-DCH): Section I describes recent advances in mixed reality enabling technologies, while section II presents the latest findings on interaction with 3D tangible and intangible digital cultural heritage. The sections include selected contributions from some of the most respected scholars, researchers and professionals in the fields of VR/AR, gamification, and digital heritage.

This book is intended for all heritage professionals, researchers, lecturers and students who wish to explore the latest mixed reality and gamification technologies in the context of cultural heritage and creative industries. It pursues a pedagogic approach based on trainings, conferences, workshops and summer schools that the ITN-DCH fellows have been following in order to learn how to design next-generation virtual heritage applications, systems and services.

Marinos Ioannides is the Founder and Director of the Digital Heritage Research Lab, which is dedicated to cultural informatics research and education at the Cyprus University of Technology. His research interests are 3D real time volume reconstructions from chaotic point clouds, as well as the holistic documentation of the past. He is the coordinator of the Marie-Curie Fellowship Initial Training Network on Digital Heritage and the H2020 Virtual Museums  projects. He is the recipient of the 2010 Tartessos Award on Virtual Archeology and a member of the EU member states expert group on digitization and digital preservation.

Nadia Magnenat-Thalmann is the Founder and Director of the MIRALab, an interdisciplinary lab in human computer animation at the University of Geneva, Switzerland. She is also Director of the Institute for Media Innovation in NTU, Singapore. Her research domains are social robots, mixed realities and medical simulation. In Singapore, she has developed the robot Nadine that is able to speak, recognize people and gestures, express mood and emotions, and remember actions. All over her career, she has received several artistic and scientific awards, among them the 2012 Humboldt Research Award. She is Editor-in-Chief of the journal “The Visual Computer” (Springer-Verlag) and a member of the Swiss Academy of Engineering Sciences.

George Papagiannakis is a computer scientist specialized in computer graphics and virtual-augmented reality. Since 2011 he is assistant professor at the computer science department of the University of Crete, Greece, and research fellow at the Computer Vision and Robotics Laboratory in the Institute of Computer Science of the Foundation for Research and Technology Hellas, Heraklion, Greece. His research interests are confined in the areas of real-time computer graphics, mixed reality presence, virtual heritage, gamification and geometric algebra. In 2011 he has been awarded with a Marie-Curie Intra-European Fellowship for Career Development from the European Commission’s Research Executive Agency.