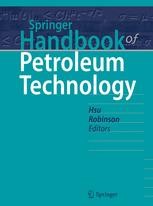 This handbook provides a comprehensive but concise reference resource for the vast field of petroleum technology. Built on the successful book "Practical Advances in Petroleum Processing" published in 2006, it has been extensively revised and expanded to include upstream technologies. The book is divided into four parts: The first part on petroleum characterization offers an in-depth review of the chemical composition and physical properties of petroleum, which determine the possible uses and the quality of the products. The second part provides a brief overview of petroleum geology and upstream practices. The third part exhaustively discusses established and emerging refining technologies from a practical perspective, while the final part describes the production of various refining products, including fuels and lubricants, as well as petrochemicals, such as olefins and polymers. It also covers process automation and real-time refinery-wide process optimization. Two key chapters provide an integrated view of petroleum technology, including environmental and safety issues.Written by international experts from academia, industry and research institutions, including integrated oil companies, catalyst suppliers, licensors, and consultants, it is an invaluable resource for researchers and graduate students as well as practitioners and professionals.

Dr. Chang Samuel Hsu had over 32 year experience at ExxonMobil and BP before joining in Florida State University six years ago to establish the Future Fuels Institute. He also established the Refinery of the Future Lab at BP. Currently, he is an Adjunct Professor at Department of Chemical and Biomedical Engineering of Florida A&M University/Florida State University and also at College of Chemical Engineering of China University of Petroleum in Beijing. In 2012, he founded Petro Bio Consulting, LLC. Dr. Hsu was the first researcher to introduce ultrahigh resolution Fourier-transform ion cyclotron resonance mass spectrometry (FT-ICR MS) for in-depth molecular characterization of petroleum fractions.  He was one of the pioneers to develop tandem mass spectrometry (MS/MS) at Exxon to provide an additional dimension for the determination of molecular structure of the components in complex mixtures.  Dr. Hsu’s research interest covers petroleum (both upstream and downstream), coal, shale and biomass oils. His current focuses are novel characterization of petroleum biomarkers for exploration and exploitation, and heavy hydrocarbon characterization for hydroprocessing, catalytic cracking, coking and fuels/lubes analyses. He also has extensive experience in environmental damage assessment and remediation for oil spills.

Dr. Paul Robinson earned BS (Honors) and MA degrees at the University of Missouri at Columbia. He spent a year at the Scripps Institution of Oceanography, then moved to the University of California at San Diego, which rewarded him with a PhD in Chemistry. After two years as a Visiting Assistant Professor at the University of Illinois at Champaign-Urbana, he began his long career in energy, starting at the Oak Ridge National Laboratory, where he studied hydrogen energy systems. Subsequently, at the Science and Technology Division of Unocal Corporation, he became involved in catalysis research. He earned several patents, some for commercial catalysts. While working for Unocal, Chevron, and Shell, he was involved in many aspects of refining and most aspects of hydrotreating and hydrocracking. He is most pleased with the work he did in support of online refinery-wide optimization at Suncor Sarnia. During his career in industry, he won several special recognition awards, including two creativity awards and a patent achievement award from Unocal. From 2014 to 2016, he served as Chief Technology Advisor for the VCC process at KBR Inc. In 2016, Paul R. Robinson founded the Katy Institute for Sustainable Energy, a non-profit organization devoted to stimulating science-based dialog on energy.  His credentials include 11 patents, 80 technical publications, a wonderful family, and a black belt in TaeKwonDo.

“This unique and comprehensive handbook is a must-have for scientists and engineers associated with the petroleum industry. ... It emphasizes the fundamentals of the many refining processes and chemical reactions, with excellent narratives to educate the reader of the purpose and functionality.” (Henrik Rasmussen, Vice President, Haldor Topsoe Inc., Houston TX)