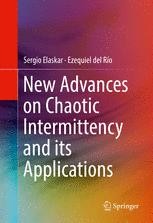 New Advances on Chaotic Intermittency and its Applications

One of the most important routes to chaos is the chaotic intermittency. However, there are many cases that do not agree with the classical theoretical predictions. In this book, an extended theory for intermittency in one-dimensional maps is presented. A new general methodology to evaluate the reinjection probability density function (RPD) is developed in Chapters 5 to 8. The key of this formulation is the introduction of a new function, called M(x), which is used to calculate the RPD function. The function M(x) depends on two integrals. This characteristic reduces the influence on the statistical fluctuations in the data series. Also, the function M(x) is easy to evaluate from the data series, even for a small number of numerical or experimental data.

As a result, a more general form for the RPD is found; where the classical theory based on uniform reinjection is recovered as a particular case. The characteristic exponent traditionally used to characterize the intermittency type, is now a function depending on the whole map, not just on the local map. Also, a new analytical approach to obtain the RPD from the mathematical expression of the map is presented. In this way all cases of non standard intermittencies are included in the same frame work.

This methodology is extended to evaluate the noisy reinjection probability density function (NRPD), the noisy probability of the laminar length and the noisy characteristic relation. This is an important difference with respect to the classical approach based on the Fokker-Plank equation or Renormalization Group theory, where the noise effect was usually considered just on the local Poincaré map.

Finally, in Chapter 9, a new scheme to evaluate the RPD function using the Perron-Frobenius operator is developed. Along the book examples of applications are described, which have shown very good agreement with numerical computations.

“The whole book is very interesting. It can be recommended to people who are just beginning their experience with intermittency: students, lecturers, PhD candidates. It should serve as a key source of references to literature for those, who wish to explore the subject of complex systems and dynamical phenomena at the edge of chaos and determinism.” (Dominik Strzałka, zbMATH 1362.37002, 2017)