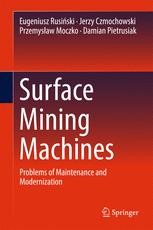 Problems of Maintenance and Modernization

This unique volume imparts practical information on the operation, maintenance, and modernization of heavy performance machines such as lignite mine machines, bucket wheel excavators, and spreaders. Problems of large scale machines (mega machines) are highly specific and not well recognized in the common mechanical engineering environment. Prof. Rusiński and his co-authors identify solutions that increase the durability of these machines as well as discuss methods of failure analysis and technical condition assessment procedures. "Surface Mining Machines: Problems in Maintenance and Modernization" stands as a much-needed guidebook for engineers facing the particular challenges of heavy performance machines and offers a distinct and interesting demonstration of scale-up issues for researchers and scientists from across the fields of machine design and mechanical engineering.

Eugeniusz Rusiński graduated with a Master of Engineering Degree in Mechanics and Machine Design from the Mechanical Faculty of Wrocław University of Technology in 1975. In the same year he was hired as assistant lecturer at his alma mater and started his PhD program, which he completed in 1980 and was awarded the Doctor of Science degree. In 1990 the Board of the Mechnical Faculty of Wrocław University of Technology awarded him the degree of Habilitated Doctor of Technical Sciences in machine construction and operation, specializing in theory of machines and mechanisms, for his dissertation entitled Microcomputer analysis of frames and superstructures of vehicles and construction machinery. In 1993 he was promoted to the position of Associate Professor, and in 2001 to the position of Full Professor. In 1996 the President of Poland awarded him the title of Professor of Technical Sciences. He developed experience in Poland and abroad, among others, in Germany, USA, India, Austria and Cuba.

In 1994 he was elected head of the Department of Computer-Aided Design (CAD), which, under his leadership, was transformed in 2013 into the Department of Machine Design and Research of Wrocław University of Technology. From 1995 to 1998 he was Deputy Director, and then from 2000 to 2005, Director of the Institute of Machine Design and Operation. In the years 2005-2012 he was Dean of the Mechanical Faculty. In the years 2008-2016 he was Vice-Rector for Research and Cooperation with the Industry at Wrocław University of Technology.

He supervised nineteen doctoral dissertations. He is author of numerous scientific publications. He has received the Team Award of the Prime Minister of the Republic of Poland five times for

Jerzy Czmochowski graduated in 1978 with a master's degree in engineering from the Faculty of Mechanical Engineering of Wrocław University of Technology. In 1985 he defended his doctoral dissertation entitled: “Stablity analysis of non-simply-connected three-layer plates using the finite element method", under the supervision of Prof. Franciszek Romanow. After completing his doctoral studies in 1982 he started work as senior assistant lecturer, and from 1989 to 2009 he was employed as research and teaching assistant professor at the Institute of Machine Design and Operation of WrUT. In 2008 he was awarded the degree of habilitated doctor by the Mechanical Faculty of Wrocław University of Technology. On November 12, 2009 he was appointed to the position of Professor of WRUT. He supervised two doctoral dissertations. His achievements include papers in the fields of fracture mechanics, diagnostics of emergency states, dynamics of surface mining machines, thermal and mechanical analysis of power industry equipment and strength analysis of load-carrying structures of machines. He received the Award of the Prime Minister of the Republic of Poland for outstanding scientific achievements in 1999 and in 2011. In 2010 he was awarded the Gold Cross of Merit.

Przemysław Moczko graduated with a degree in mechanical engineering from Wrocław University of Technology, Faculty of Mechanical Engineering. In October 1999 he started the PhD program in Design and Operation of Machines. The focus of his doctoral dissertation, which he defended in 2003, was on issues related to predicting the durability of elements of load-carrying structures. In 2015 he received the degree of habilitated doctor for his achievements in applying numerical and experimental methods in condition assessment and prediction of durability of load-carrying structures of machines and in monitoring the processes and condition of low-speed machines. He is also co-author of significant technical achievements: 1. The excavating unit cutting elements of surface mining machines. 2. Innovative fab wheel of the WPK-5.35 centrifugal fan. His scientific achievements are confirmed by numerous publications in national and international journals and by patents and pending patent applications. He also has the status of an international independent expert on assessment of designs of specialist mining equipment, their implementation and compliance with required standards.

Damian Pietrusiak graduated with a degree in mechanical engineering from Wrocław University of Technology, Faculty of Mechanical Engineering. In October 2009 he started the PhD program in Design and Operation of Machines. In 2013, he defended his doctoral dissertation entitled: "Assessment of the dynamics of load-carrying structures of bucket-wheel excavators with the application of modal analysis". Currently he is Assistant Professor at the Department of Machine Design and Research. In his scientific work he focuses on structural dynamics and statics of load-carrying structures as well as on the application of innovative engineering solutions in the heavy industry, the automotive industry and other sectors. He specializes in vibration and modal analysis with the use of numerical and experimental methods. He cooperates with different industries as contractor and manager of numerous research projects. He is an author of many research papers and patents/patent applications.