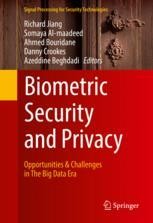 This book highlights recent research advances on biometrics using new methods such as deep learning, nonlinear graph embedding, fuzzy approaches, and ensemble learning. Included are special biometric technologies related to privacy and security issues, such as cancellable biometrics and soft biometrics. The book also focuses on several emerging topics such as big data issues, internet of things, medical biometrics, healthcare, and robot-human interactions. The authors show how these new applications have triggered a number of new biometric approaches. They show, as an example, how fuzzy extractor has become a useful tool for key generation in biometric banking, and vein/heart rates from medical records can also be used to identify patients. The contributors cover the topics, their methods, and their applications in depth.

Richard Jiang is a Lecturer in the department of Computer Science and Digital Technologies, Northumbria University, Newcastle upon Tyne, UK. He received his PhD in Computer Science from Queen’s University Belfast, Belfast, UK, in July 2008. After his PhD study, he has been working in Brunel Univ., Loughborough Univ., Swansea Univ., Univ. of Bath and Univ. of Sheffield. His research interests mainly reside in the fields of Artificial Intelligence, Man-Machine Interaction, Visual Forensics, and Biomedical Image Analysis. His research has been funded by EPSRC, BBSRC, TSB, EU FP, and industry funds, and he has authored and coauthored more than 40 publications.

Danny Crookes was appointed to the Chair of Computer Engineering in 1993 at Queens University Belfast, and was Head of Computer Science from 1993 to 2002. He is Director of Research for Speech, Image and Vision Systems at the Institute for Electronics, Communications and Information Technology (ECIT) at Queens University Belfast. His current research interests include the use of novel architectures (especially GPUs) for high-performance image processing. He has applied expertise in language design, optimizing compilers and software generators, plus software tools for hardware description and architecture generation, to the goal of developing high level software tools to enable rapid development of real-time video processing systems. He is currently involved in projects in automatic shoeprint recognition (ESPRC), speech separation and enhancement (EPSRC) and processing of 4D confocal microscopy imagery (sponsored by INI and Andor Technologies). He has published over 200 scientific papers in journals and international conferences, and has presented tutorials on parallel image processing at several international conferences.

Ahmed Bouridane received the M.Phil. degree in electrical engineering (VLSI design for signal processing) from the University of Newcastle-Upon-Tyne, U.K., in 1988, and the Ph.D. degree in electrical engineering (computer vision) from the University of Nottingham, U.K., in 1992. From 1992 to 1994, he worked as a Research Developer in telesurveillance and access control applications. In 1994, he joined Queen’s University Belfast, Belfast, U.K., initially as Lecturer in computer architecture and image processing and then as a Reader in computer science. He became a Professor in Image Engineering and Security at Northumbria University at Newcastle (U.K.) in 2009. His research interests are in imaging for forensics and security, biometrics, homeland security, image/video watermarking and cryptography. He has authored and co-authored more than 200 publications.

Somaya Al-Maadeed received her PhD in computer science from Nottingham University, UK in 2004. Following her PhD, she works as an assistant professor (Qatar University), where she did research in the areas of biometrics and computer vision and image processing. She is a senior member of IEEE. Dr. Sumaya is leading the Computer Vision and Image Processing group at Qatar University. She has more than six years working experience in the Biometric and Forensic Lab at Ministry of Interior.

Azeddine Beghdadi is Full Professor at the University of Paris 13 (Institut Galilée) Sorbonne Paris Cite and the director of L2TI laboratory. He received Maitrise in Physics and Diplôme d’Etudes Approfondies in Optics and Signal Processing from University Orsay-Paris XI and the PhD in Physics (Specialism: Optics and Signal Processing) from University Paris 6. He published over than 240 international refereed scientific papers. He is a founding member of the L2TI laboratory. His research interests include image quality enhancement and assessment, image and video compression, bio-inspired models for image analysis and processing, and physics-based image analysis. He is the founder and Co-Chair of the European Workshop on Visual Information Processing (EUVIP). He served as conference chair and technical chair of many international conferences. He also served as session organizer and a member of the organizing and technical committees for many IEEE conferences. Dr Beghdadi is a member of the editorial board of Signal Processing (Elsevier) and member of the editorial board of the Scientific World Journal Signal Processing (Hindawi Publisher). Dr Beghdadi is a Senior member of IEEE EURASIP member and member of the IEEE-MMTC.