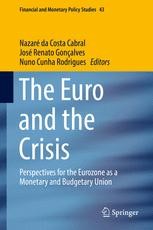 The Euro and the Crisis

Perspectives for the Eurozone as a Monetary and Budgetary Union

This book analyzes the effects of the recent crisis and evaluates potential solutions to the gridlock that is currently dominating the Eurozone and the European Union, concerning both the monetary policy and the budgetary and fiscal policy. The timely study highlights the main challenges that European political leaders will face in the months to come. Furthermore, its interdisciplinary approach embraces economic, financial and legal perspectives, so as to ensure the global coherence and comprehensiveness of its content. The contributors to this volume are prominent experts from the areas of Economics, Finance, Law, and Political Science, offering readers a multifaceted view of the topics discussed.

Nazaré da Costa Cabral holds a license degree (1994), a Masters (1998), and a PhD (2007) in law, from Lisbon Law School (Faculdade de Direito, Universidade de Lisboa), and she holds a license degree in economics (2015), from Nova SBE - School of Business & Economics (Universidade Nova de Lisboa). Nazaré is Associate Professor in tenure, in Lisbon Law School.  She also lectures in other Universities, either in Portugal or abroad. Nazaré is principal researcher of the Center for European, Economic, Fiscal and Tax Law Research (CIDEFF) of Lisbon Law School (Group IV on ‘Crises, Public Policies, Fiscal Policy and the Euro’). She is also a member of the Board of ‘Instituto de Direito Económico, Financeiro e Fiscal’ (IDEFF), of the same School, in which she also lectures. Nazaré is vice-president of the journal Revista de Finanças Públicas e Direito Fiscal (Public Finances and Tax Law Journal), published by IDEFF and Almedina Editors. She is also a member of the Executive and Editorial Board of the journal Concorrência & Regulação (Competition & Regulation), published by The Portuguese Competition Authority, IDEFF and Almedina Editors, and a member of the Editorial Board of the journal Economia & Segurança Social (Economics & Social Security), published by Diário de Bordo Editores.

José Renato Gonçalves has PhD in Law (Law and Economics of European Monetary Union) and is Professor of law and economics at Lisbon University Law School (Faculdade de Direito da Universidade de Lisboa). His teaching and research activities focus on European Union and Integration Law, Economic and Financial Regulation, Development, Regional and Local Law, and Public Finance. Currently, he is member of the board of the Centre for Research in European, Economic, Financial and Tax Law (CIDEEFF), of the board of the European Institute (Instituto Europeu) and of the editorial board of the quarterly Competition and Regulation Journal(Revista de Concorrência e Regulação).

Nuno Cunha Rodrigues is a Professor at the Faculty of Law, University of Lisbon. He earned his PhD in legal and economic sciences, his master’s degree and completed his graduation in law from the Faculty of Law, University of Lisbon. He is also Vice-President of the European Institute and a member of the Board of the IDEFF. He was a visiting Professor at the Law School of Louvain-la-Neuve (Belgium); Salgaocar Law School (Goa – India); International Law Institute (New Delhi – India); Eduardo Mondlane University (Maputo – Mozambique); Fundação Getúlio vargas (São Paolo – Brazil); Catholic University (Lisbon); He has published several articles and books, namely in his area of expertise which lies with EU law, Economic law, Competition Law, Public procurement and Public Finance. He joined the research group on Globalization, Economic Integration and Development: European and Lusophone Perspectives and the group on Crisis, Public Policies, Taxation Policies and the Euro as a member.