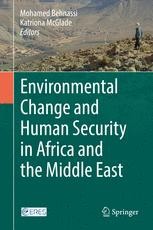 Environmental Change and Human Security in Africa and the Middle East

This volume brings together insights on the interactions between environmental change and human security in the Middle East and Africa. These regions face particular challenges in relation to environmental degradation, the decline of natural resources and consequent risks to current and future human security.

The chapters provide topical analysis from a range of disciplines on the theory, discourse, policy and practice of responding to global environmental change and threats to human security.

Case studies from Morocco, Tunisia, Egypt, Turkey, Iraq and Syria provide empirical evidence, with a focus section dedicated to the critical issue of water resources and water security in the region.

The contributions demonstrate above all that the risks posed to human security arise through multiple and interconnected processes operating across diverse spatial and temporal scales. The complexity of these processes requires new ways of thinking and intervening. As a contribution, the current volume provides engaging insights from theory and practice for those seeking to address the challenges of environmental change.


Mohamed Behnassi, specialist in Environment and Human Security Politics, is Associate Professor, Director of the Research Laboratory for Territorial Governance, Human Security and Sustainability (LAGOS), and ex-Head of Public Law Department (2014-2015) at the Faculty of Law, Economics and Social Sciences, IbnZohr University of Agadir, Morocco. He was the Founder and Director of the North-South Center for Social Sciences (NRCS) from 2008 to 2015, and is currently Director of the Center for Research on Environment, Human Security and Governance (CERES). Dr. Behnassi is Member of the Moroccan Association for Regional Sciences (AMSR), and Active member of the National Council for Climate Change, Sustainable Development and Leadership (NCCSD), India. He is also Senior Social Compliance Auditor (practicing consultancy by monitoring human rights at work and the sustainability of the global supply chain).


Dr. Behnassi obtained his Ph.D in 2003 from the Faculty of Law, Economics and Social Sciences, Hassan II University of Casablanca for a Thesis titled: Multilateral Environmental Negotiations: Towards a Global Governance for Environment. In 2011, he completed a U.S. State Department-sponsored Civic Education and Leadership Fellowship (CELF) at the Maxwell School of Citizenship and Public Affairs, Syracuse University, USA and in 2014 he obtained a Diploma in Diplomacy and International Environmental Law from the University of Eastern Finland and the United Nations Environment Programme (UNEP), Finland. Dr. Behnassi has pursued several post-doctoral trainings since the completion of his PhD.


Katriona McGlade, MSc in International Development, is a Fellow and coordinator for International Development at the independent, not-for-profit think tank Ecologic Institute in Berlin, Germany. Katriona works on European environmental and international development policy, leading and contributing to a range of research and consultancy projects, both for the EU (European Commission, European Parliament) and for the German government (Federal Ministry of Education and Research, Federal Environment Agency, GIZ).


From 2010 until 2012, Katriona was engaged in a three-year European research project funded under the European Commission’s 7th Framework Programme (FP7). The Climate Change, Hydro-conflicts and Human Security (CLICO) project examined the impacts of climate change on water resources in the Mediterranean, Middle East and Sahel region and the consequences for conflict and human security. Katriona’s other research has included analysis of governance and policy in the areas of climate adaptation, marine and freshwater environments, biodiversity, sustainability and international development. Her particular research interests include the interactions and trade-offs between sectoral policies, the impact of EU policies beyond European borders and the use of participatory processes to produce legitimate and equitable policy outcomes.


Katriona is involved in a number of activities that foster exchange and dialogue on environmental issues, and teaches visiting students from Mexico at the ITESM Summer School on Environment and Sustainability. She is responsible for coordinating Ecologic Institute’s role in the British German Environment Forum (BGEF), which facilitates exchange and discussion on issues of common environmental concern between the two countries. She has also coordinated stakeholder involvement in Cooperation across the Atlantic for Marine Governance Integration (CALAMAR), a transatlantic dialogue process on marine governance between the EU and the USA and is a member of the Ecoscholars Network that fosters regular professional and academic exchange on international environmental policy issues.