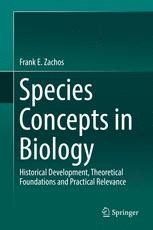 Frank E. Zachos offers a comprehensive review of one of today’s most important and contentious issues in biology: the species problem. After setting the stage with key background information on the topic, the book provides a brief history of species concepts from antiquity to the Modern Synthesis, followed by a discussion of the ontological status of species with a focus on the individuality thesis and potential means of reconciling it with other philosophical approaches.
More than 30 different species concepts found in the literature are presented in an annotated list, and the most important ones, including the Biological, Genetic, Evolutionary and different versions of the Phylogenetic Species Concept, are discussed in more detail. Specific questions addressed include the problem of asexual and prokaryotic species, intraspecific categories like subspecies and Evolutionarily Significant Units, and a potential solution to the species problem based on a hierarchical approach that distinguishes between ontological and operational species concepts. A full chapter is dedicated to the challenge of delimiting species by means of a discrete taxonomy in a continuous world of inherently fuzzy boundaries. Further, the book outlines the practical ramifications for ecology and evolutionary biology of how we define the species category, highlighting the danger of an apples and oranges problem if what we subsume under the same name (“species”) is in actuality a variety of different entities.
A succinct summary chapter, glossary and annotated list of references round out the coverage, making the book essential reading for all biologists looking for an accessible introduction to the historical, philosophical and practical dimensions of the species problem.

“Species Concepts in Biology is an efficient and effective book that neatly summarizes several centuries of progress on the species problem. Impressively, it is also a good read.” (Bryan C. Carstens, The Quarterly Review of Biology, Vol. 93 (1), March, 2018)

“Zachos is primarily a biologist rather than a philosopher, and so he has tried to write a book for biologists about a biological topic but with a philosophical flavor. He has certainly succeeded at this. … As biologists, we impose species boundaries and phylogenetic trees onto this fuzziness, and then we write an apparently endless series of books about it. Zachos’ book is one of the better ones, especially as an introduction to the topic … .” (David A. Morrison, Systematic Biology, February, 2017)

“The book … gives an excellent overview on the historical, philosophical and practical aspects of what is usually called ‘the species problem’. It is a book that I fully recommend for everyone dealing with the species concept, as students, taxonomists or philosophers. … the compact overview presented by Frank Zachos is among the best compilations I read and I fully recommend it to all those who want to learn about species and their own views on it.” (Nikolaus U. Szucsich, Annalen des Naturhistorischen Museums in Wien, Vol. 119, January, 2017)