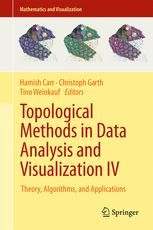 This book presents contributions on topics ranging from novel applications of topological analysis for particular problems, through studies of the effectiveness of modern topological methods, algorithmic improvements on existing methods, and parallel computation of topological structures, all the way to mathematical topologies not previously applied to data analysis.

Topological methods are broadly recognized as valuable tools for analyzing the ever-increasing flood of data generated by simulation or acquisition. This is particularly the case in scientific visualization, where the data sets have long since surpassed the ability of the human mind to absorb every single byte of data.

The biannual TopoInVis workshop has supported researchers in this area for a decade, and continues to serve as a vital forum for the presentation and discussion of novel results in applications in the area, creating a platform to disseminate knowledge about such implementations throughout and beyond the community.

The present volume, resulting from the 2015 TopoInVis workshop held in Annweiler, Germany, will appeal to researchers in the fields of scientific visualization and mathematics, domain scientists with an interest in advanced visualization methods, and developers of visualization software systems.