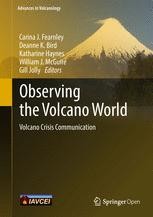 This open access book provides a comprehensive overview of volcanic crisis research, the goal being to establish ways of successfully applying volcanology in practice and to identify areas that need to be addressed for future progress. It shows how volcano crises are managed in practice, and helps to establish best practices.  Consequently the book brings together authors from all over the globe who work with volcanoes, ranging from observatory volcanologists, disaster practitioners and government officials to NGO-based and government practitioners to address three key aspects of volcanic crises.

First, the book explores the unique nature of volcanic hazards, which makes them a particularly challenging threat to forecast and manage, due in part to their varying spatial and temporal characteristics. Second, it presents lessons learned on how to best manage volcanic events based on a number of crises that have shaped our understanding of volcanic hazards and crises management. Third, it discusses the diverse and wide-ranging aspects of communication involved in crises, which merge old practices and new technologies to accommodate an increasingly challenging and globalised world.

The information and insights presented here are essential to tapping established knowledge, moving towards more robust volcanic crises management, and understanding how the volcanic world is perceived from a range of standpoints and contexts around the globe.

Carina J. Fearnley is Lecturer in Science and Technology Studies at University College London in the Department of Science and Technology Studies. Her research draws on relevant expertise in the social sciences to enable concepts of scientific uncertainty, risk, and complexity to be re-framed and communicated within the context of Disaster Risk Reduction and provide practical insights into how, early warning systems specifically, can be made more effective. Carina is also interested in the transdisciplinary potential of science and art collaborations around environmental hazards, and the role of geopolitics in the production of risk.

Deanne Bird is a geographer, with a focus on community engagement and risk communication. She is currently working as a Research Specialist with the University of Iceland where she is exploring human behaviour before, during and after disaster to identify factors that influence decision-making among at-risk regional and rural populations and the tourism sector. In particular, Deanne is interested in developing and assessing the efficacy of risk communication tools and strategies to drive behaviour change. Deanne is also contracted as a Senior Advisor – Community Engagement for the Victorian Department of Health and Human Services within the Latrobe Health Innovation Zone team. As a Senior Advisor, Deanne is responsible for local project leadership, coordination, monitoring and reporting relating to health specific actions arising from the Hazelwood Mine Fire Inquiry 2016. She also enjoys an adjunct position with Monash University, Melbourne.

Katharine Haynes is a Senior Research Fellow in the Department of Geography and Planning at Macquarie University, Sydney researching the human dimensions of hazards and risk. She is particularly interested in community and child-centred disaster risk reduction and has considerable experience undertaking research with post disaster communities. Katharine was called as an expert witness at the 2009 Victorian Bushfires Royal Commission, following the Black Saturday disaster. In 2015, she was awarded the Australian Academy of Science Prize for Innovation, Research and Education (ASPIRE) for the most important contributions in the area of Disaster Risk Reduction and Climate Change Adaptation.

Bill McGuire is an academic, activist, broadcaster and popular science and speculative fiction writer. He is currently Professor Emeritus of Geophysical and Climate Hazards at University College London. Bill was a member of the UK Government Natural Hazard Working Group established in January 2005, in the wake of the Indian Ocean tsunami, and in 2010 a member of the Science Advisory Group in Emergencies (SAGE) addressing the Icelandic volcanic ash problem. In 2011, he was one of the contributors to the IPCC report on climate change and extreme events. His non-fiction books include A Guide to the End of the World: Everything you Never Wanted to Know and Surviving Armageddon: Solutions for a Threatened Planet. His current book is Waking the Giant: How a Changing Climate Triggers Earthquakes, Tsunamis and Volcanoes; ranked at number five in The Guardian's Top 10 'eco' books. Bill presented the BBC Radio 4 series, Disasters in Waiting and Scientists Under Pressure and the End of the World Reports on Channel 5 and Sky News. He has also contributed to many other television and radio programmes and was consultant and main contributor for the lauded BBC Horizon films; Supervolcanoes and Megatsunami - Wave of Destruction, as well as for the BBC drama, Supervolcano. He also co-presented Project Doomsday with comedy duo, Robin & Partridge. Bill has written for many newspapers and magazines including The Guardian, The Times, The Observer, New Scientist, Focus and Prospect, and blogs for the New Weather Institute, Scientists for Global Responsibility and Extinction Rebellion.  Bill's latest short story, Incoming, is published in the anthology Knock Twice: 25 Modern Folk Talks for Troubling Times. He lives, runs and grows fruit and veg in the Peak District, where he resides with his wife Anna, sons Jake (9) and Fraser (14), and cats Dave, Toby and Cashew.

Gill Jolly went to Cambridge University to read Geological Sciences. This then led to a Ph.D. at Lancaster University on the physical properties of lavas, including the physical properties of lavas from Mt. Etna, Italy and Oldoinyo Lengai, Tanzania. On completing her Ph.D, she joined the British Geological Survey. Her work at BGS was varied, mostly concentrating on mineral exploration, using 3D modelling software for mine design and structural geology interpretations, and environmental geochemistry. From 1996 to 2005, she was involved in the monitoring of Soufrière Hills Volcano on Montserrat, West Indies. From 1997 to 1999, she acted as Deputy Chief Scientist at the Montserrat Volcano Observatory, and then became the Director of MVO for various periods between 1999 to 2005. She joined GNS Science in 2006 and became the Head of the Volcanology Department based in Taupo, New Zealand. Between 2007 and 2014, she led the Volcanology team through both New Zealand eruptions and responses in the SW Pacific. In 2014, she became the Director of Natural Hazards. She led a team of over 150 people who are responsible for research and monitoring of New Zealand’s geological hazards and for providing advice to the NZ government. During this time, she led the team through the response to the November 2016 M7.8 Kaikoura Earthquake. Most recently, Gill has moved into the General Manager – Strategy role at GNS Science and is enjoying developing the future science path for GNS Science across energy futures, natural hazards and risk, and environment and climate.