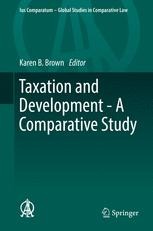 Taxation and Development - A Comparative Study

This volume examines the tax systems of some twenty countries to determine whether their tax laws are used to support growth and development across borders in lower-income and poor countries. Given the critical economic development needs of poorer countries and the importance of stability in these regions to the security of populations throughout the world, the use of a country’s tax laws to support investment in the developing world gains crucial significance. This book explores whether international standards promoting the fundamental values of the major tax systems of the world accommodate incentives for these nations. In addition, it analyzes the way in which adoption of principles by higher income nations to protect their own revenue bases has a spill-over effect, impairing the ability of developing countries to sustain their economies. Following an introduction that synthesizes worldwide trends, the volume contains separate chapters for a variety of countries detailing the underlying goals and values of each system and the way in which the decision to employ (or not employ) incentives accommodates those ends. The chapters include reports for: Australia, Belgium, Brazil, Croatia, Czech Republic, France, Hong Kong, Israel, Italy, Japan, the Maldives, the Netherlands, Poland, Portugal, South Africa, Uganda, United Kingdom, United States, and Venezuela.

The volume memorializes the work of the General  Reporter and National Reporters at the Taxation and Development session of the 19th Congress of the International Academy of Comparative Law held in July, 2014, in Vienna, Austria.

Karen B. Brown is the Donald Phillip Rothschild Research Professor of Law at the George Washington University Law School in Washington, D.C.