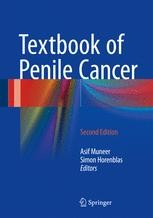 The aim of the updated book is to include new developments and update the literature in relation to sentinel node biopsy, new radiology techniques and long term epidemiological data. This book is useful for urologists, dermatologists, sexual health physicians as well as those with an interest in virology and genomics related to squamous cell cancers.

The surgical techniques are all well illustrated with a step by step guide in order to allow those individuals in centres which are not expert centres to undertake the management of this devastating tumour.

Asif Muneer is a consultant urological surgeon with a specialist interest in andrology and men’s Health. After completing a research degree at the Wolfson Institute, University College London, he went on to complete his higher surgical training in Oxford and was awarded the Intercollegiate Gold Medal. After completing a further fellowship he was appointed as a consultant based at University College Hospital as well as Honorary Senior Lecturer at University College London. He is now part of one of the largest penile cancer teams in the UK. Asif has been actively involved in the diagnosis and management of penile cancer for a number of years. His other areas of interest are priapism, erectile dysfunction, penile reconstructive surgery, and male infertility.

Manit Arya has an interest in minimally invasive uro-oncology and is based at University College Hospital, London, UK. He has published extensively throughout the urology literature, particularly in the field of uro-oncology, as well as editing eight books. He has completed a research degree investigating the theory of metastatic disease. He completed his higher surgical training in London, and has since organised a number of national educational courses for both medical students and trainees.

Simon Horenblas trained as a urological surgeon in The Netherlands and was appointed at the Netherlands Cancer Institute in 1988. He became chief of the department of urology in 1993 and professor of urologic oncology in 2000.

His clinical work focussed solely in the field of uro-oncology. His research has centred around tissue preservation and early detection of metastases. He has been at the forefront of developing sentinel lymph node biopsy in urologic cancers, bladder preservation and prostate sparing cystectomy. He has authored more than 150 peer reviewed papers and has written a number of chapters in oncology textbooks.
Show all