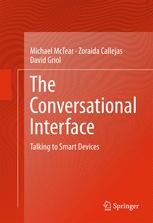 Zoraida Callejas is Associate Professor at the University of Granada, Spain, and member of the CITIC-UGR Research Institute. She graduated in Computer Science in 2005, and was awarded a PhD in 2008, also at the University of Granada. Her research is focused on dialogue systems, especially on affective human-machine conversational interaction, and she has made more than 160 contributions to books, journals and conferences. She has participated in several research projects related to these topics and contributes to scientific committees and societies in the area.  She has been Visiting Professor at the Technical University of Liberec, Czech Republic (2007-13), University of Trento, Italy (2008), University of Ulster, Northern Ireland (2009), Technical University of Berlin, Germany (2010), University of Ulm, Germany (2012, 2014) and ParisTech, France (2013). She is co-author (with Michael McTear) of the book Voice Application Development for Android (Packt Publishing, 2013).

David GriolDavid Griol is Professor at the Department of Computer Science in the Carlos III University of Madrid (Spain). He obtained his Ph.D. degree in Computer Science from the Technical University of Valencia (Spain) in 2007. He also has a B.S. in Telecommunication Science from this University. He has participated in several European and Spanish projects related to natural language processing and conversational interfaces. His main research activities are mostly related to the study of statistical methodologies for dialog management, dialog simulation, user modeling, adaptation and evaluation of dialog systems, mobile technologies, and multimodal interfaces. His research results have been applied to several application domains including Education, Healthcare, Virtual Environments, Augmented Reality, Ambient Intelligence and Smart Environments, and he has published in a number of international journals and conferences. He has been a visiting researcher at the University of Ulster (Belfast, UK), Technical University of Liberec (Liberec, Czech Republic), University of Trento (Trento, Italy), Technical University of Berlin (Berlin, Germany), and ParisTech University (Paris, France). He is a member of several research associations for Artificial Intelligence, Speech Processing, and Human-Computer Interaction.
Show all