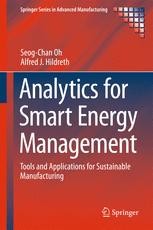 Tools and Applications for Sustainable Manufacturing

It also details practical energy management systems, making it a valuable resource for professionals involved in real energy management processes, and allowing readers to implement the procedures and applications presented.
Show all
About the authors

Seog-Chan Oh, PhD is a senior researcher at the General Motors Research and Development Center, Warren, MI since 2007 where he has been developing analytical models for improvement in sustainable manufacturing. He has strong functional expertise in Operations Research and Advanced Statistics. He received the PhD degree in Industrial Engineering from Pennsylvania State University in 2006. Before he began his PhD studies, he was an IT consultant for seven years at Daewoo Information Systems in Korea. He won a Boss Kettering Award, GM’s highest award for recognizing technical inventions and innovations. He also won a Korean Prime Minister Award, TeamGM Award, GM Patent Usage Award, IEEE Appreciation Award, Best Paper Award (KIIE), First Runner-Up Award (IEEE Web Service Challenge) and etc. He holds 4 Patents filed and 45 scholary articles including 3 Books. He has served on AIAG energy working group, IEEE Cloud and SCC program committees and IJWR editorial board.

Al Hildreth, PE, CEM is the Company Energy Manager for General Motors – focusing on energy and utility budgets, metrics, benchmarking, efficiency projects, water and carbon reporting. He has worked for GM for over 30 years, including 5 years in Europe and Asia, 10 years with Saturn Corporation in Spring Hill, TN, and previously worked for a manufacturer of air pollution control equipment in R&D. He is a registered Professional Engineer, Certified Energy Manager, and a Certified Hazardous Materials Manager.  He received his Bachelor of Science degree in Engineering from Oakland University and a Master’s of Science degree in Engineering from Rensselaer Polytechnic Institute.