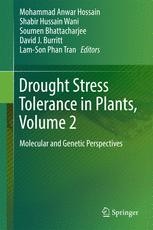 Drought is one of the most severe constraints to crop productivity worldwide, and thus it has become a major concern for global food security.  Due to an increasing world population, droughts could lead to serious food shortages by 2050. The situation may worsen due to predicated climatic changes that may increase the frequency, duration and severity of droughts. Hence, there is an urgent need to improve our understanding of the complex mechanisms associated with drought tolerance and to develop modern crop varieties that are more resilient to drought. Identification of the genes responsible for drought tolerance in plants will contribute to our understanding of the molecular mechanisms that could enable crop plants to respond to drought. The discovery of novel drought related genes, the analysis of their expression patterns in response to drought, and determination of the functions these genes play in drought adaptation will provide a base to develop effective strategies to enhance the drought tolerance of crop plants. Plant breeding efforts to increase crop yields in dry environments have been slow to date mainly due to our poor understanding of the molecular and genetic mechanisms involved in how plants respond to drought. In addition, when it comes to combining favourable alleles, there are practical obstacles to developing superior high yielding genotypes fit for drought prone environments. Drought Tolerance in Plants, Vol 2:  Molecular and Genetic Perspectives combines novel topical findings, regarding the major molecular and genetic events associated with drought tolerance, with contemporary crop improvement approaches. This volume is unique as it makes available for its readers not only extensive reports of existing facts and data, but also practical knowledge and overviews of state-of-the-art technologies, across the biological fields, from plant breeding using classical and molecular genetic information, to the modern omic technologies, that are now being used in drought tolerance research to breed drought-related traits into modern crop varieties. This book is useful for teachers and researchers in the fields of plant breeding, molecular biology and biotechnology.

Dr. Mohammad Anwar Hossain is a professor in the Department of Genetics and Plant Breeding, Bangladesh Agricultural University, Mymensingh-2202, Bangladesh. He received his B.Sc. in agriculture and M.S. in genetics and plant breeding from Bangladesh Agricultural University, Bangladesh. He also received an M.Sc. in agriculture from Kagawa University, Japan, in 2008 and a Ph.D. in abiotic stress physiology and molecular biology from Ehime University, Japan, in 2011. In November 2015 he moved to Tokyo University, Japan, as a JSPS postdoctoral scientist to work on isolating low phosphorus stress tolerant genes/QTLs from rice. He has published 25 research articles, 15 book chapters, and 5 review articles on important aspects of plant physiology and breeding, plant stress responses and tolerance mechanisms, and exogenous chemical priming-induced abiotic stress tolerance. Recently, he edited a book entitled Managing Salt Tolerance in Plants: Molecular and Genomic Perspectives published by CRC press, Taylor and Francis Group, USA. He has attended several international and national conferences for presenting his research ﬁndings. He is a professional member of the Bangladesh Society of Genetics and Plant Breeding, Bangladesh Association for Plant Tissue Culture and Biotechnology, and the Seed Science Society of Bangladesh.

Dr. Shabir Hussain Wani is an Assistant Professor in the Department of Genetics and Plant Breeding, Sher-e-Kashmir University of Agricultural Sciences and Technology of Kashmir, Srinagar, Jammu and Kashmir, India. He received his B.Sc. in Agriculture from BhimRao Agricultural University Agra, India and M.Sc. in Genetics and Plant Breeding from Central Agricultural University, Manipur, India and Ph.D. in Plant Breeding and Genetics on “Transgenic rice for abiotic stress tolerance” from the Punjab Agricultural University Ludhiana India. After obtaining his PhD he worked as Research Associate in the Biotechnology Laboratory, ICAR-Central Institute of temperate Horticulture, Rangreth Srinagar India for two years, up to October 2011. In November 2011 he joined the Krishi Vigyan Kendra (Farm Science Centre) as Programme Coordinator (i/c) at Senapati Manipur, India. He teaches courses related to plant breeding, seed science and technology, and stress breeding, and has published more than 80 papers/chapters in journals, and books of international and national repute. He has also edited several books on current topics in crop Improvement including “Managing Salt Tolerance in Plants: Molecular and Genomic Perspectives” published by CRC press, Taylor and Francis Group, USA in 2015. His Ph.D. research resulted in first prize in North zone, at National level, competition in India. He was awarded a Young Scientist award from the society for Promotion of Plant Sciences, Jaipur India in 2009. He is the fellow of the Society for Plant Research, India. Recently he also received Young Scientist Award (Agriculture) 2015 from Society for Plant Research, Meerut, India. He has been selected for one year University Grants Commission funded RAMAN fellowship for Post Doc Research in Michigan State University USA for the year 2016-17. He has attended several International and National conferences, presenting his research.

Dr. Soumen Bhattacharjee, presently Head, UGC Centre for Advanced Studies, Department of Botany, the University of Burdwan, West Bengal, completed his Masters in Botany and Ph.D. on the abiotic stress physiology of plants at the University of Burdwan, West Bengal, India. Later, he started his teaching career as a faculty member in the Department of Botany in Delhi University Constituent College. After serving almost two and half years, he joined the West Bengal Education Service and worked mainly in the Post Graduate Department of Botany, Hooghly Mohsin College, West Bengal, as Lecturer, Reader and Associate Professor. In 2007, Dr Bhattacharjee was selected by the Indian Council of Agricultural Research (ICAR) as a Senior Scientist and joined the Vivekanada Institute of Hill Agriculture, Almora, India. In 2013 he joined the University of Burdwan as Associate Professor. His research interests center around plant redox biology, particularly understanding the relationship between oxidative stress and plant growth, and the role of ROS signalling in stress acclimation, characterization of redox-regulatory mechanisms during germination of rice under abiotic stress and understanding the physiological basis of antioxidant accumulation in under-utilized medicinal plants. He has published 34 Research papers in International peer reviewed journals, 12 Review articles in various National and International Journals and 14 Book chapters, and has 6 edited books and journal volumes. He is also the member of several professional Research bodies and is a guest editor and reviewer for several international peer-reviewed journals.

Dr. David J. Burritt is an Associate Professor in the Department of Botany, The University of Otago, Dunedin, New Zealand. He received his B.Sc. and M.Sc. (hons) in Botany, and his Ph.D. in Plant Biotechnology from The University of Canterbury, Christchurch, New Zealand. His research interests include oxidative stress and redox biology, plant based foods and bioactive molecules, plant breeding and biotechnology, cryopreservation of germplasm, and the stress biology of plants, animals and algae. He has over 90 peer-reviewed publications.

Dr. Lam-Son Phan Tran is Head of the Signaling Pathway Research Unit at RIKEN Center for Sustainable Resource Science, Japan. He obtained his M.Sc. in Biotechnology in 1994 and Ph.D. in Biological Sciences in 1997, from Szent Istvan University, Hungary. After doing his postdoctoral research at the National Food Research Institute (1999-2000) and the Nara Institute of Science and Technology of Japan (2001), in October 2001, he joined the Japan International Research Center for Agricultural Sciences to work on the functional analysis of transcription factors and osmosensors in Arabidopsis plants under stress. In August 2007, he moved to the University of Missouri-Columbia, USA as a Senior Research Scientist to coordinate a research team working to discover soybean genes to be used for genetic engineering of drought-tolerant soybean plants. His current research interests are elucidation of the roles of phytohormones and their interactions in abiotic stress responses, as well as translational genomics of legume crops with the aim to enhance crop productivity under adverse environmental conditions. He has published over 90 peer-reviewed papers with more than 70 research and 20 review articles, contributed 7 book chapters to various book editions published by Springer, Wiley-Blackwell, and American Society of Agronomy, Crop Science Society of America and Soil Science Society of America. He has also edited 5 book volumes for Springer, including this one.