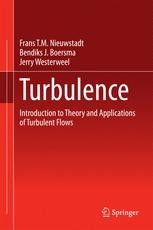 Introduction to Theory and Applications of Turbulent Flows

This book provides a general introduction to the topic of turbulent flows. Apart from classical topics in turbulence, attention is also paid to modern topics. After studying this work, the reader will have the basic knowledge to follow current topics on turbulence in scientific literature. The theory is illustrated with a number of examples of applications, such as closure models, numerical simulations and turbulent diffusion, and experimental findings. The work also contains a number of illustrative exercises

Review from the Textbook & Academic Authors Association that awarded the book with the 2017 Most Promising New Textbook Award:
“Compared to other books in this subject, we find this one to be very up-to-date and effective at explaining this complicated subject. We certainly would highly recommend it as a text for students and practicing professionals who wish to expand their understanding of modern fluid mechanics.”

Frans T. M. Nieuwstadt (1946-2005) was director of the Laboratory for Aero and Hydrodynamics at the Delft University of Technology from 1986 till 2005. Previously he worked at the Royal Netherlands Meteorological Institute (KNMI), where he conducted research on the atmospheric boundary layer. After completing his studies in Aeronautics in Delft, he worked for 2 years under the supervision of Anatol Roshko at the California Institute of Technology. At KNMI he obtained his Ph.D. under the supervision of Henk Tennekes, Jakob Steketee and Jeff Zimmerman. In Delft his interest in turbulence expanded to various areas, such as polymer drag reduction, transition to turbulence in pipe flow, disperse multiphase turbulent flows, and turbulent reacting flows, while maintaining an interest in atmospheric turbulence. He was one of the initiators of the J.M. Burgers Centre, which is the Netherlands research school for fluid mechanics that encompasses the activities of entire fluid mechanics community in the Netherlands. Also he was chairman of the Foundation for Fundamental Research on Matter (FOM) from 2000 till 2005. He was one of the founding editors of the scientific journal Flow, Turbulence & Combustion.

Bendiks J. Boersma (1969- ) studied mechanical engineering at the University of Twente under supervision of Leen van Wijngaarden. He obtained his Ph.D. at the Delft University of Technology in 1997 under supervision of Frans Nieuwstadt. His main interests are the numerical simulation of turbulent flows, including aeroacoustics, drag reduction, and supercritical fluids. After his Ph.D. he worked for two years at the Center for Turbulence Research at Stanford University, and then became a Research Fellow with the Royal Netherlands Academy of Arts and Sciences. He was appointed full professor in 2007 at the Delft University of Technology, and currently leads the Energy Technology section.

Jerry Westerweel (1964- ) studied applied physics at the Delft University of Technology. He obtained his Ph.D. in 1993 under supervision of Frans Nieuwstadt. As a Research Fellow with the Royal Netherlands Academy of Arts and Sciences he worked at Stanford University, the California Institute of Technology, and the University of Illinois at Urbana-Champaign. He became an Anthony van Leeuwenhoek professor at the Delft University of Technology in 2002, and leads the Fluid Mechanics section since 2005. His scientific interests are turbulence and coherent flow structures, and optical measurement techniques for quantitative measurements in flows.