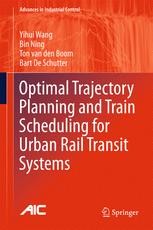 This book contributes to making urban rail transport fast, punctual and energy-efficient –significant factors in the importance of public transportation systems to economic, environmental and social requirements at both municipal and national levels.  It proposes new methods for shortening passenger travel times and for reducing energy consumption, addressing two major topics: (1) train trajectory planning: the authors derive a nonlinear model for the operation of trains and present several approaches for calculating optimal and energy-efficient trajectories within a given schedule; and (2) train scheduling: the authors develop a train scheduling model for urban rail systems and optimization approaches with which to balance total passenger travel time with energy efficiency and other costs to the operator.
Mixed-integer linear programming and pseudospectral methods are among the new methods proposed for single- and multi-train systems for the solution of the nonlinear trajectory planning problem which involves constraints such as varying speed restrictions and maximum traction/braking force. Signaling systems and their effects are also accounted for in the trajectory planning model.

Origin–destination passenger demand is included in the model formulation for train scheduling. Iterative convex programming and efficient bi-level approaches are utilized in the solution of the train-scheduling problem. In addition, the splitting rates and route choices of passengers are also optimized from the system point of view.

The problems and solutions described in Optimal Trajectory Planning and Train Scheduling for Urban Rail Transit Systems will interest researchers studying public transport systems and logistics whether from an academic or practitioner background as well as providing a real application for anybody studying optimization theory and predictive control.
Show all
About the authors

Yihui Wang received the B.Sc in control engineering from the School of Electronic and Information Engineering, Beijing Jiaotong University in 2007. She became a Ph.D. student at Delft Center for Systems and Control, Delft University of Technology in September 2010 and obtained the Ph.D. degree in November, 2014. She is currently an assistant professor at the State Key Laboratory of Rail Traffic Control and Safety, Beijing Jiaotong University. Her main research interests include train scheduling, energy-efficient train control, hybrid systems, and model predictive control.

Bin Ning received the B.S. degrees from Northern Jiaotong University (now Beijing Jiaotong University), Beijing, China, in 1982, where he received both the M.S. and Ph.D. degrees afterwards. He is currently a full professor with the State Key Laboratory of Rail Traffic Control and Safety, Beijing Jiaotong University, as well as the President of Beijing Jiaotong University. His research interests include intelligent transportation systems, communication-based train control, rail transport systems, system fault-tolerant design, fault diagnosis, system reliability, and safety studies. Prof. Ning is a Fellow of the Institution of Railway Signal Engineers and IET, a Senior Member of the China Railway Society, and a member of the Western Returned Scholars Association. He is the Chair of the Technical Committee on Railroad Systems and Applications of the IEEE Intelligent Transportation Systems Society.

Ton van den Boom received the MSc and PhD degrees in Electrical Engineering from Eindhoven University of Technology, Eindhoven, The Netherlands, in 1988 and 1993, respectively. Currently he is an Associate Professor at Delft University of Technology, The Netherlands. His research interests are in the areas of linear and nonlinear model predictive control, control and identification of discrete event systems and hybrid systems with applications in railway, robotics, and printers.