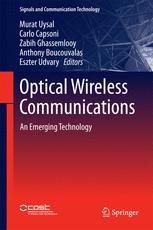 This book focuses on optical wireless communications (OWC), an emerging technology with huge potential for the provision of pervasive and reliable next-generation communications networks. It shows how the development of novel and efficient wireless technologies can contribute to a range of transmission links essential for the heterogeneous networks of the future to support various communications services and traffic patterns with ever-increasing demands for higher data-transfer rates.

The book starts with a chapter reviewing the OWC field, which explains different sub-technologies (visible-light, ultraviolet (UV) and infrared (IR) communications) and introduces the spectrum of application areas (indoor, vehicular, terrestrial, underwater, intersatellite, deep space, etc.). This provides readers with the necessary background information to understand the specialist material in the main body of the book, which is in four parts.

The first of these deals with propagation modelling and channel characterization of OWC channels at different spectral bands and with different applications. The second starts by providing a unified information-theoretic treatment of OWC and then discusses advanced physical-layer methodologies (including, but not limited to: advanced coding, modulation diversity, cooperation and multi-carrier techniques) and the ultimate limitations imposed by practical constraints. On top of the physical layer come the upper-layer protocols and cross-layer designs that are the subject of the third part of the book. The last part of the book features a chapter-by-chapter assessment of selected OWC applications.

Optical Wireless Communications is a valuable reference guide for academic researchers and practitioners concerned with the future development of the world’s communication networks. It succinctly but comprehensively presents the latest advances in the field.

Carlo Capsoni graduated in Electronic Engineering at the Politecnico di Milano, Milano, Italy, in 1970 and in the same year joined the “Centro di Studi per le Telecomunicazioni Spaziali” (CSTS), research centre of the Italian National Research Council (CNR), Politecnico di Milano, Milano, Italy. In this position, he was in charge of the installation of the meteorological radar of the CNR sited at Spino d’Adda, Italy, and since then, he has been the scientific responsible for radar activity. In 1979, he was actively involved in the satellite Sirio SHF propagation experiment (11–18 GHz) and later in the Olympus (12, 20, and 30 GHz) and Italsat (20, 40, and 50 GHz) satellite experiments. His scientific activity mainly focuses on theoretical and experimental aspects of electromagnetic-wave propagation at centimetre and millimetre wavelengths in the presence of atmospheric precipitation with a particular emphasis on attenuation, wave depolarization, incoherent radiation, interference due to hydrometeor scatter, precipitation-fade countermeasures, modelling of the radio channel, and the design of advanced satellite-communication systems. He is also active in free-space optics theoretical and experimental activities. Since 1975, he has been teaching a course on aviation electronics at the Politecnico di Milano, where he became Full

Professor of Electromagnetics in 1986. Prof. Capsoni was a member of the ITU national group and was the Italian delegate in COST projects of the European Economic Community related to propagation aspects of telecommunications (COST 205, 210).He is a member of the Italian Society of Electromagnetics (SIEm) and editor of the SIEm Magazine. He is also a member of the Coritel governing body. Prof. Capsoni currently serves as the Chair of OPTICWISE Working Group on “Propagation Modelling and Channel Characterization”.

Zabih Ghassemlooy received his BSc (Hons) from the Manchester Metropolitan University in 1981, and MSc and PhD from the University of Manchester Institute of Science and Technology (UMIST), in 1984 and 1987, respectively. During 1986-87, he worked in UMIST and from 1987 to 1988 he was a Post-doctoral Research Fellow at the City University, London. In 1988, he joined Sheffield Hallam University as a Lecturer, becoming a Professor in Optical Communications in 1997. During 2004-2012, he was an Associate Dean for Research in the School of Computing, Engineering and from 2012-2014 Associate Dean for Research and Innovation in the Faculty of Engineering and Environment, Northumbria University at Newcastle, UK. He currently heads the Northumbria Communications Research Laboratories within the Faculty. He has been a visiting professor at a number of institutions and currently is at University Tun Hussein Onn Malaysia. He is the Editor-in-Chief of the International Journal of Optics and Applications, and British Journal of Applied Science Technology. His researches interests are on optical wireless communications, visible light communications and radio over fibre/free-space optics. He has over 48 PhD students and published over 550 papers (195 in journals + 4 books) and presented over 65 keynote and invited talks. He is a co-author of a CRC book on “Optical Wireless Communications – Systems and Channel Modelling with MATLAB®(2012); a co-editor of an IET book on “Analogue Optical Fibre Communications”. From 2004-06 he was the IEEE UK/IR Communications Chapter Secretary, the Vice-Chairman (2004-2008), the Chairman (2008-2011), and Chairman of the IET Northumbria Network (Oct 2011-..) Prof. Ghassemlooy is the Vice Chair of the EU COST Action OPTICWISE and also serves as the Chair of OPTICWISE Working Group on “Physical Layer Algorithm Design and Verification”.

Anthony C. Boucouvalas is a Professor in Communications Networks and Applications at the University of Peloponnese in Tripoli, Greece. Prof. Boucouvalas has been actively involved with research in various aspects of fibre optic communications, wireless communications and multimedia and has an accumulated 35 years experience in well known academic and industrial research centres. He graduated with a B.Sc. in Electrical and Electronic Engineering from Newcastle upon Tyne University in 1978. He received his MSc and D.I.C. degrees in Communications Engineering, in 1979, from Imperial College, where he also received his PhD degree in Fibre Optics in 1982. Subsequently he joined GEC Hirst

Research Centre, and became Group Leader and Divisional Chief Scientist working on fibre optic components, measurements and sensors, until 1987, when he joined Hewlett Packard Laboratories as Project Manager. At HP he worked in the areas of optical communication systems, optical networks, and instrumentation, until 1994, when he joined Bournemouth University. In 1996, he became a Professor in Multimedia Communications and in 1999 the Director of the Microelectronics and Multimedia research Centre at Bournemouth University. In 2007, he joined the Department of Telecommunication Science at the University of Peloponnese where he served for 6 years as Head of Department. His current research interests lie in optical wireless communications, fibre optic communications, inverse fibre optic problems, network protocols, and human-computer interfaces and Internet Applications. He has published over 300 scientific papers. He is a Fellow of IET, a Fellow of IEEE, (FIEEE), and a Fellow of the Royal Society for the encouragement of Arts, Manufacturers and Commerce. Prof. Boucouvalas currently serves as the Chair of OPTICWISE Working Group on “Networking Protocols”.

Received Ph.D. degree in electrical engineering from Budapest University of Technology and Economics (BME), Budapest, Hungary, in 2009. She is currently an associate professor at BME, Department of Broadband Infocommunications and Electromagnetic Theory, where she leads the Optical and Microwave Telecommunication Lab. She currently teaches courses on optical communication devices and networks. Dr. Udvary’s research interests are in the broad areas of optical communications, include optical and microwave communication systems, radio over fibre systems, optical and microwave interactions and applications of special electro-optical devices. Her special research focuses on multifunctional semiconductor optical amplifier application techniques. She is deeply involved in visible light communication, indoor optical wireless communication and microwave photonics techniques. Dr. Udvary has authored more than 80 journal and conference papers, and one book chapter. She currently serves as the Chair of OPTICWISE Working Group on “Advanced Photonic Components”.
Show all