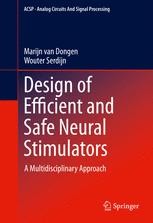 This book discusses the design of neural stimulator systems which are used for the treatment of a wide variety of brain disorders such as Parkinson’s, depression and tinnitus.  Whereas many existing books treating neural stimulation focus on one particular design aspect, such as the electrical design of the stimulator, this book uses a multidisciplinary approach: by combining the fields of neuroscience, electrophysiology and electrical engineering a thorough understanding of the complete neural stimulation chain is created (from the stimulation IC down to the neural cell). This multidisciplinary approach enables readers to gain new insights into stimulator design, while context is provided by presenting innovative design examples.

Marijn N. van Dongen was born in Pijnacker, The Netherlands, in 1984. He received the M.Sc. and Ph.D. degrees in electrical engineering from the Delft University of Technology, Delft, The Netherlands, in 2010 and 2015, respectively. His research interests include the design of neural stimulator output circuits as well as the modeling of the electrophysiological and electrochemical processes during electrical stimulation. Currently he is working for NXP Semiconductors, Nijmegen, The Netherlands. Dr. van Dongen served as the Financial Chair of the IEEE BioCAS2013 Conference.

Wouter A. Serdijn (M'98, SM'08, F'11) was born in Zoetermeer ('Sweet Lake City'), the Netherlands, in 1966. He received the M.Sc. (cum laude) and Ph.D. degrees from Delft University of Technology, Delft, The Netherlands, in 1989 and 1994, respectively. Currently, he full professor of bioelectronics at Delft University of Technology, where he heads the Section Bioelectronics.  His research interests include low-voltage, ultra-low-power and ultra wideband integrated circuits and systems for biosignal conditioning and detection, neuroprosthetics, transcutaneous wireless communication, power management and energy harvesting as applied in, e.g., hearing instruments, cardiac pacemakers, cochlear implants, neurostimulators, portable, wearable, implantable and injectable medical devices and electroceuticals.

He is co-editor and co-author of 9 books, 8 book chapters and more than 300 scientific publications and presentations. He teaches Circuit Theory, Analog Signal Processing, Micropower Analog IC Design and Bioelectronics. He received the Electrical Engineering Best Teacher Award in 2001, 2004 and 2015. Wouter A. Serdijn is an IEEE Fellow, an IEEE Distuingished Lecturer and a Mentor of the IEEE.

“This is an excellent monograph on the electronics of neural stimulators for clinical and experimental recordings including chronic spine devices for the control of pain. … The parameters of safe operation and application are discussed for neurophysiologists, engineering specialists, fellows, and students in graduate school. Junior undergraduate students will find the discussions very relevant and helpful in their work and studies.” (Joseph J. Grenier, Amazon.com, April, 2016)