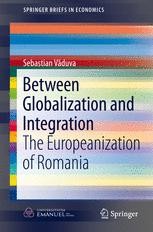 Between Globalization and Integration

The Europeanization of Romania

This volume focuses on the integration and globalization of Romania, a prominent emerging market in South-Eastern Europe and one of the major players in the securitization of the Black Sea and the Eastern European border, as both a part of NATO since 2004 and a fully integrated EU Member State since 2007. It will examine the challenges the country has faced in its progression from totalitarianism to democracy through several waves of reform intended to update and streamline its political and economic processes for success in the free-market capitalist arena. Having learned the hard way about some of the key aspects of public administration, Romania has learned a place for itself among the diverse global players of Europe and beyond.

The first section reviews current perspectives on globalization and its impact in the late 20th century. It has “flattened” the Earth, generating better communication and exchanges than ever before, but also gathering a fair amount of criticisms from commentators seeing it as little else than neo-colonialism. Cooperative-administrative strategies are being suggested instead, in order for new public administration patterns to smoothly run in coordination with the globalized world.

In the second section, the European Union is described as a complex multi-level socio-political entity, itself historically in turmoil over its own style of rule – e.g. hierarchy vs. coordination, integration vs. centralization, etc. – or even its own existence, as the European dream seemed to be losing steam with the general population of Europe several times in the previous century. Powers and responsibilities of the European institutions and agencies are also discussed.

Thirdly, the recent history of Romania is approached from the Europeanization context, starting from its post-1989 days of confusion and of attempting to jumpstart democracy. Eventually, it has to undergo a series of reforms and internalize some principles fundamental to the EU in order for the much-awaited accession to occur and its multiple effects to start taking place.

A country with a rich cultural heritage and straddling multiple socio-political axes, Romania has plenty more to offer in the new geostrategic, security and development contexts of the 21st-century Europe. As such, this volume provides inspiration for further research and practical application opportunities on topics of local, European and global significance.

Dr. Sebastian A. Văduva is the current Dean of the Griffiths School of Management at the Emanuel University in Oradea, Romania, as well as a management scholar with numerous active ties, academic and entrepreneurial, in both Europe and the United States. He has developed various seminars on leadership and effective management on both micro- and macro-economic levels and is behind several programs intended to boost Romanian economy by drawing in international investors and business partners.