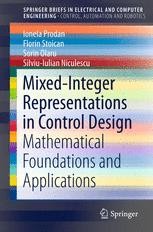 In this book, the authors propose efficient characterizations of the non-convex regions that appear in many control problems, such as those involving collision/obstacle avoidance and, in a broader sense, in the description of feasible sets for optimization-based control design involving contradictory objectives.

The text deals with a large class of systems that require the solution of appropriate optimization problems over a feasible region, which is neither convex nor compact. The proposed approach uses the combinatorial notion of hyperplane arrangement, partitioning the space by a finite collection of hyperplanes, to describe non-convex regions efficiently. Mixed-integer programming techniques are then applied to propose acceptable formulations of the overall problem. Multiple constructions may arise from the same initial problem, and their complexity under various parameters - space dimension, number of binary variables, etc. - is also discussed.

This book is a useful tool for academic researchers and graduate students interested in non-convex systems working in control engineering area, mobile robotics and/or optimal planning and decision-making.

Ionela PRODAN received the B.Eng. degree from the University “Politehnica” of Bucharest, Romania in 2009 and the PhD degree in Control Engineering from Supélec, Gif-sur-Yvette, France in 2012. She followed a postdoctoral fellowship within the Chair on Systems Science and the Energetic Challenge - EDF, École Centrale Paris and Supélec, France from 2013 to 2014. Her PhD thesis “Control of Multi-Agent Systems in the Presence of Constraints” was selected as one of the three finalists of the “European PhD Award on Control for Complex and Heterogeneous Systems”, campaign 2012-2013 (presented at ECC’14, Strasbourg, France, June 26th, 2014). She was awarded with a “Bourse Dorothy LEET/AFFDU” (Association Française des Femmes Diplomées des Universités) in 2014. She is currently an Associate Professor at INP Grenoble, LCIS (Laboratory of Conception and Integration of Systems) in France. She has held visiting appointments at Lund University (Sweden), FEUP, University of Porto (Portugal), Ohio State University (USA) and authored or co-authored 7 journal papers, 3 book chapters and 25 IEEE and IFAC affiliated conference papers. Her research interests include constrained optimization-based control (via distributed and decentralized approaches), mixed-integer programming, set-theoretic methods and their application to energy systems and multi-agent dynamical systems in general.

Florin STOICAN received the Electrical Engineering Degree in 2008 from the University “Politehnica” of Bucharest (UPB), Romania and the PhD Degree in Control Engineering in 2011 from École Supérieure d'Électricité (Supélec), Gif-sur-Yvette, France. He was a postdoctoral research fellow at NTNU, Trondheim, Norway with an ERCIM Alain Bensoussan Fellowship Programme and held visiting appointments at DTU (Denmark), KUL (Belgium), TU Ilmenau (Germany), INP Grenoble (France). He is currently Assistant Professor in the Automatic Control and Systems Engineering Department of UPB. Dr. Stoican is the author or co-author of 1 monograph, 11 journal papers, 2 book chapters, and of over 35 IEEE and IFAC affiliated conference papers. His interests cover fault tolerant control strategies and various topics in non-convex control design and constrained optimization from the prism of set-theoretic methods.

Sorin OLARU received the MSc and the PhD from the University “Politehnica” of Bucharest, the PhD and the HDR degree (Habilitation à diriger des recherches) from University Paris Sud, France. He was nominated Senior Member IEEE in 2012 and is the recipient of the Archimedes prize of the European Union in 2002. He held research positions at INRIA in Rennes and Saclay and is currently a Professor at CentraleSupélec in France. His interests are encompassing the optimization-based control design and set-theoretic characterization of constrained dynamical systems as well as the numerical methods in optimization and control. S. Olaru is involved in research projects related to predictive control, networked control systems, fault tolerant control and control of systems affected by time-delays and held visiting appointments at NTNU Trondheim (Norway), CSDC Newcastle (Australia), Bernoulli Center in Lausanne (Switzerland), University of Patras (Greece) and Linnaeus Center in Lund (Sweden). He is Member of IFAC Technical Committee on Robust Control from 2012 and Associate Editor for IMA Journal of Mathematical Control and Information (Oxford Journals) from 2015. He authored or co-authored 1 monograph, 1 edited volume, 35 journal papers, 20 book chapters and 120 conference papers.

Silviu-Iulian NICULESCU received the B.Sc. degree from the Polytechnical Institute of Bucharest, Romania, the M.Sc., Ph.D. degrees, in automatic control, from INP Grenoble, France and the French habilitation from Université Technologique de Compiègne, France in 1992, 1993, 1996 and 2003, respectively. From 1992 to 1997, he was with the Department of Automatic Control and Computers, University “Politehnica” Bucharest, Romania. From 1997 to 2006, he was with the HEUDIASYC (Heuristics and Diagnosis of Complex Systems) laboratory, Compiègne, France, as a researcher at CNRS (French National Center for Scientific Research). He also held a postdoctoral position in the Department of Applied Mathematics, ENSTA, Paris, France, from 1996 to 1997. In September 2006, he joined L2S (Laboratory of Signals and Systems), Gif-sur-Yvette, where he is currently a research director (senior researcher) at CNRS and the head of the laboratory. Dr. Niculescu is the author or co-author of 9 books and more than 400 book chapters or scientific papers. Since 2012, he is the founding editor and the scientific responsible of a new Springer (book) series: Advances in Delays in Dynamics (ADD@S).Dr. Niculescu was awarded the CNRS Silver and Bronze Medals for scientific research, and the Ph.D. Thesis Award from INP Grenoble (France) in 2011, 2001, and 1996, respectively. His research interests include delay systems, robust control, operator theory, and numerical methods in optimization, and their applications to the design of engineering systems.