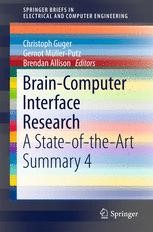 This book describes ten of the most promising brain-computer-interface (BCI) projects to have emerged in recent years. BCI research is developing quickly, with many new ideas, research groups, and improved technologies. BCIs enable people to communicate just by thinking – without any movement at all. Several different groups have helped severely disabled users communicate with BCIs, and BCI technology is also being extended to facilitate recovery from stroke, epilepsy, and other conditions.

Each year, hundreds of the top BCI scientists, engineers, doctors, and other visionaries compete for the most prestigious honor in the BCI research community: the annual BCI Award. The 2014 BCI Award competition was again competitive, with 69 research groups vying for a nomination. This book summarizes the 2014 BCI Award, including the ten projects that were nominated, the winner, and analyses and discussions of the submitted projects and how they reflect general trends in BCI development. Each of these ten groups provides a chapter summarizing their nominated project, including an introduction, description of methods, results, and newer work completed after the project was submitted. Hence, this book provides a cutting-edge overview of the newest BCI research trends, from top groups, in an easy to read format with numerous supporting pictures, graphs, and figures.

Christoph Guger has been active in brain-computer interface development for more than 15 years and involved in international research projects. His company g.tec medical engineering GmbH is an important supplier of this technology on the international market.

Brendan Allison developed many different types of brain-computer interfaces in his carrier and lately worked on hybrid BCIs. He did pioneering work with the P300 speller and motor imagery based systems.

Gernot Müller-Putz is leading the brain-computer interface group of the University of Technology in Graz which is one of the pioneering and most active groups worldwide.