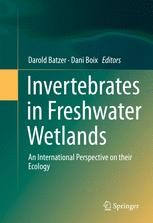 An International Perspective on their Ecology

About this book
Wetlands are among the world’s most valuable and most threatened habitats, and in these crucially important ecosystems, the invertebrate fauna holds a focal position. Most of the biological diversity in wetlands is found within resident invertebrate assemblages, and those invertebrates are the primary trophic link between lower plants and higher vertebrates (e.g. amphibians, fish, and birds). As such, most scientists, managers, consultants, and students who work in the world’s wetlands should become better informed about the invertebrate components in their habitats of interest. Our book serves to fill this need by assembling the world’s most prominent ecologists working on freshwater wetland invertebrates, and having them provide authoritative perspectives on each the world’s most important freshwater wetland types. The initial chapter of the book provides a primer on freshwater wetland invertebrates, including how they are uniquely adapted for life in wetland environments and how they contribute to important ecological functions in wetland ecosystems. The next 15 chapters deal with invertebrates in the major wetlands across the globe (rock pools, alpine ponds, temperate temporary ponds, Mediterranean temporary ponds, turloughs, peatlands, permanent marshes, Great Lakes marshes, Everglades, springs, beaver ponds, temperate floodplains, neotropical floodplains, created wetlands, waterfowl marshes), each chapter written by groups of prominent scientists intimately knowledgeable about the individual wetland types. Each chapter reviews the relevant literature, provides a synthesis of the most important ecological controls on the resident invertebrate fauna, and highlights important conservation concerns. The final chapter synthesizes the 15 habitat-based chapters, providing a macroscopic perspective on natural variation of invertebrate assemblage structure across the world’s wetlands and a paradigm for understanding how global variation and environmental factors shape wetland invertebrate communities.
Show all
About the authors

Darold Batzer serves as Professor in the University of Georgia's department of Entomology. He has edited five books on wetlands and served as Editor-in-Chief of Wetlands, the major journal cover the topic, from 2006 to 2012. Dani Boix serves as Aggregate Professor at the University of Girona, Spain's Institute of Aquatic Ecology and Department of Environmental Sciences. He has conducted extensive research and published widely on wetland invertebrates.

“Invertebrates in Freshwater Wetlands, the editors, along with their contributing authors, address this knowledge gap by summarizing published research on wetlands from temperate and tropical regions and from lowland to alpine systems. … A book dedicated to invertebrate ecology and diversity in wetlands is overdue. Aquatic ecologists, natural resource managers, and even educated general readers will find this an interesting and informative read.” (Barbara Hayford, The Quarterly Review of Biology, Vol. 93 (4), December, 2019)​