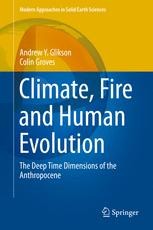 The Deep Time Dimensions of the Anthropocene

The book outlines principal milestones in the evolution of the atmosphere, oceans and biosphere during the last 4 million years in relation with the evolution from primates to the genus Homo – which uniquely mastered the ignition and transfer of fire. The advent of land plants since about 420 million years ago ensued in flammable carbon-rich biosphere interfaced with an oxygen-rich atmosphere. Born on a flammable Earth surface, under increasingly unstable climates descending from the warmer Pliocene into the deepest ice ages of the Pleistocene, human survival depended on both—biological adaptations and cultural evolution, mastering fire as a necessity. This allowed the genus to increase entropy in nature by orders of magnitude. Gathered around camp fires during long nights for hundreds of thousandth of years, captivated by the flickering life-like dance of the flames, humans developed imagination, insights, cravings, fears, premonitions of death and thereby aspiration for immortality, omniscience, omnipotence and the concept of god. Inherent in pantheism was the reverence of the Earth, its rocks and its living creatures, contrasted by the subsequent rise of monotheistic sky-god creeds which regard Earth as but a corridor to heaven. Once the climate stabilized in the early Holocene, since about ~7000 years-ago production of excess food by Neolithic civilization along the Great River Valleys has allowed human imagination and dreams to express themselves through the construction of monuments to immortality. Further to burning large part of the forests, the discovery of combustion and exhumation of carbon from the Earth’s hundreds of millions of years-old fossil biospheres set the stage for an anthropogenic oxidation event, affecting an abrupt shift in state of the atmosphere-ocean-cryosphere system. The consequent ongoing extinction equals the past five great mass extinctions of species—constituting a geological event horizon in the history of planet Earth.

Dr Andrew Glikson is an Earth and Paleo-climate Scientist, Visiting Fellow at the Australian National University, Research School of Earth Science, the School of Archaeology and Anthropology, and the Planetary Science Institute, and a member of the ANU Climate Change Institute.

"This masterful and overarching book could only have been written by geoscientists that had delved into both the earliest evidence preserved on Earth and into the youngest perturbations of our human-overwhelmed biosphere. Beginning with the earliest Earth systems, the crucial presence of liquid water and the dawn of simple life, the book traces the explosions of Phanerozoic life, interrupted only by several mass extinctions. And so, genetic evolution leads to the cultural evolution of humanity involving the iconic mastery of fire, the agricultural revolution and the explosion of human populations. The accelerating effects of human activities on the ecology and therefore on human health have become the focus of our modern world: the Anthropocene. Finally, this book tackles the perennial question, “Are we alone in this Universe” that involves the evolution of intelligence in the context of randomness or chaos.  Congratulations to both authors."
Professor Victor Gostin, University of Adelaide

"This is a most innovative and challenging book. One of its most interesting features is the explicit use of the stratigraphic record  - the timeline of Earth History – to trace (or infer) the evolution of life on the planet (and not just human evolution). The co-evolution of life and the geosphere is fascinating. It certainly gave rise to the interdiscipline of biogeochemistry (the great element cycles of the planet), which in turn has become a key component of Earth System science. Importantly, this book uses the frame of Earth System science throughout, and shows the close nexus between the long-term geological record and Earth System science in its broadest sense."
Professor Will Steffen, Australian National University

"This book is about the Earth, how its systems work, how it has evolved and where it may be heading. "
"The writing is clear and the sources of information are well documented, making this an excellent resource book for anyone who seeks a clear picture of the evolution of life on Planet Earth, and the forces that control our climate now, and have controlled our climate in the past. The book closes with consideration of the future and some philosophical words about human nature, the present situation, how it developed and how we have responded."
Professor Hugh Davies, University of Papua New Guinea

“Andrew Glikson and Colin Groves’ new book “Climate, Fire, and Human Evolution” traces the fascinating and complex history of the Earth over the past 4 billion years. It explores the fundamental context of the Earth’s climate system, the cycles of carbon, oxygen and nitrogen, and the crucial role of fire, to provide the critical baseline for our understanding of how a single species, Homo sapiens, has changed the atmosphere, oceans and biosphere. The fate of our species, and all the others with which the share this planet, is now in peril from the unintended consequences of our development, and especially our use of energy. I commend this scholarly yet readable work as a vital reference for understanding our past and present, and hopefully, for saving our future.”
Professor Lesley Hughes, Macquarie University

With the continuing accumulation of CO2 in the upper atmosphere now exceeding the 400 ppm worrisome barrier with no sign of a diminishing trend, Andrew Glikson's extended edition provides a timely and perhaps final alarm. It includes an anthropological dimension by Colin Groves that better contextualizes his message of grave concern and places it ever more firmly where it belongs: on the shoulders of those people who are complicit in promoting, directly and indirectly, the demise of life on Earth.
Professor emeritus Colin L. Soskolne, University of Alberta