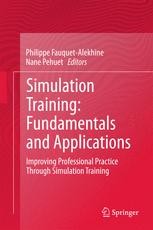 Drawing on decades of industrial experience, this insightful and practical guide uses case studies and an interdisciplinary perspective to explain the fundamentals of simulation training to improve performance of high-risk professional activities. It seeks to identify those conditions under which simulation training has been shown to improve professional practice while employing extensive real examples. Simulation Training: Fundamentals and Application helps readers to develop their own synthesis of the simulation learning method and to use such training to enhance their skills and performance. Case studies demonstrate five specific theatres of professional practice - the nuclear-power industry, aeronautics, surgery, anesthesia and metallurgy – and then detailed analysis highlights the common factors and key results. The author’s background as a Human Factors Consultant, Physicist and Physiologist has enriched studies of humans in work situations, work organization and management and he has also been involved in pedagogical conception of experimental training on simulators based on his experience as a safety expert on nuclear power plant. The book is useful to practitioners, researchers and students, both in industry and in university. It is clearly cross disciplinary as it presents and discusses applications in engineering, professional practice (airline pilots) and medicine.

Fauquet-Alekhine Philippe Human Factors Consultant, doctor in Physics Science, Work Psychologist from the Conservatoire des Arts & Métiers (Paris, France), author of several scientific communications, he contributes to researches and interventions in firms regarding the study 4/12 of Human in work situation, work organization, management; he collaborates to research in psycho-sociology at the Department of Social Psychology (LSE, London, UK) and at the Medical Training Center of the University Hospital of Angers (France). His scientific productions especially concern the analysis of work activity, its modalities and contributions, its application in industrial environment. They also concern more specific sides as the psycholinguistic approach for analysis or operational communication, or cognitive aspects of nonsimulated work activities or of learning and training on simulator. For the industrial field, he investigates aerospace, airlines, navy, nuclear industry, and medicine. Involved in the pedagogical conception of experimental training on simulator, he collaborates new scenarii based on his own experimental observations or by taking advantage of his experience as safety expert on nuclear power plant (NPP) during four years, trained as reactor pilot in accidental situations, and involved in exercises of crisis management. Pehuet Nane CNRS engineer, project manager until 2008 at the Club "Developments of work facing technological mutations ", she has coordinated several collective works such as: “Apprendre par la simulation" (Learn from the simulation) under direction of P. Pastré, Ed. Octares (2005); “Facteurs Humains et Fiabilité” (Human factors and reliability) under the direction of R. Amalberti, Ed. Octares (1997), “Travail et competence, le sens des evolutions” (Work & skills: the meaning of developments), Ed. Club CRIN CNRS (1998). Since 2009, she was responsible for the valuation of the national institute of Human & Social Science of the French national research center (INSMI/CNRS) and is now in charge of European and international cooperation. She is graduated from the University of Paris-Dauphine in Sociology, graduated in Science of the Education from the University of Paris 1 Sorbonne, and graduated in Science - Technology from the Conservatoire des Arts & Métiers (Paris, France).