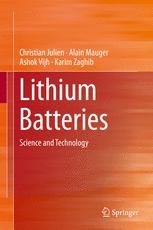 The book focuses on the solid-state physics, chemistry and electrochemistry that are needed to grasp the technology of and research on high-power Lithium batteries. After an exposition of fundamentals of lithium batteries, it includes experimental techniques used to characterize electrode materials, and a comprehensive analysis of the structural, physical, and chemical properties necessary to insure quality control in production. The different properties specific to each component of the batteries are discussed in order to offer manufacturers the capability to choose which kind of battery should be used: which compromise between power and energy density and which compromise between energy and safety should be made, and for which cycling life. Although attention is primarily on electrode materials since they are paramount in terms of battery performance and cost, different electrolytes are also reviewed in the context of safety concerns and in relation to the solid-electrolyte interface. Separators are also reviewed in light of safety issues. The book is intended not only for scientists and graduate students working on batteries but also for engineers and technologists who want to acquire a sound grounding in the fundamentals of battery science arising from the interaction of electrochemistry, solid state materials science, surfaces and interfaces.

Dr. Christian M. Julien received his engineer degree in Physics from Conservatoire des Arts et Métiers, Paris and obtained his PhD in materials science from Université Pierre et Marie Curie, Paris. He has 35 years of research experience in the field of solid state ionics and materials for energy storage and conversion, and, has developed lithium microbatteries. He is especially well known for his contributions on vibrational spectroscopy of lithium intercalation compounds. He was director of NATO Advanced Study Institutes on intercalation compounds and materials for batteries. Presently, he joints the laboratory PHENIX at Université Pierre et Marie Curie where he is investigating cathode and anode materials for lithium-ion batteries. Dr. Julien is an active member of The Electrochemical Society and international editorial boards and editor of Journal of Materials.

Dr. Ashok Vijh is Maître-de-recherche at the Institut de Recherche d’Hydro-Québec and, concurrently, invited Professor at the INRS of Université du Québec. Elected to The Royal Society of Canada in 1985, he was President of its Academy of Science (2005-2007). He is an electrochemist and materials scientist who has published over 360 refereed papers and six books on various problems of charge transfers across electrified interfaces. His work has been awarded over 60 distinctions: prizes, medals, decorations, fellowships, honorary doctorates, named lectureships and professorships, academy memberships and international editorial boards.

Dr. Karim Zaghib received his Ph.D. from the Institut National Polytechnique de Grenoble in 1990 and undertook post-doctoral studies under a Saft-DGA contract (1990-1992). From 1992 to 1995, he was a guest researcher at the Japanese Ministry of International Trade and Industry (MITI) and at the Osaka National Research Institute (ONRI). In 1995, he joined Hydro-Québec, where he currently serves as Administrator of the energy storage and conversion unit. Dr. Zaghib is especially well known for his contributions to the development and understanding of lithium-ion battery materials, particularly through his collaborations on graphite anodes, and on olivine cathodes. In 1996, he was the first to propose the use of nano-scale LTO for lithium-ion batteries and hybrid supercapacitors.

“This book covers the chosen topics comprehensively with good illustrations and a large number of references, including recent ones. … This book will be useful to students … researchers in academia, laboratories, and energy-related industries. With its focus on fundamental materials science, the book not only informs you of the state of the art, but also prepares you for the advances that are likely to come.” (N. Balasubramanian, MRS Bulletin, Vol. 41, September, 2016)