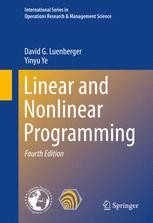 This new edition covers the central concepts of practical optimization techniques, with an emphasis on methods that are both state-of-the-art and popular. One major insight is the connection between the purely analytical character of an optimization problem and the behavior of algorithms used to solve a problem. This was a major theme of the first edition of this book and the fourth edition expands and further illustrates this relationship. As in the earlier editions, the material in this fourth edition is organized into three separate parts. Part I is a self-contained introduction to linear programming. The presentation in this part is fairly conventional, covering the main elements of the underlying theory of linear programming, many of the most effective numerical algorithms, and many of its important special applications. Part II, which is independent of Part I, covers the theory of unconstrained optimization, including both derivations of the appropriate optimality conditions and an introduction to basic algorithms. This part of the book explores the general properties of algorithms and defines various notions of convergence. Part III extends the concepts developed in the second part to constrained optimization problems. Except for a few isolated sections, this part is also independent of Part I. It is possible to go directly into Parts II and III omitting Part I, and, in fact, the book has been used in this way in many universities.

New to this edition is a chapter devoted to Conic Linear Programming, a powerful generalization of Linear Programming. Indeed, many conic structures are possible and useful in a variety of applications. It must be recognized, however, that conic linear programming is an advanced topic, requiring special study.   Another important topic is an accelerated steepest descent method that exhibits superior convergence properties, and for this reason, has become quite popular. The proof of the convergence property for both standard and accelerated steepest descent methods are presented in Chapter 8.  As in previous editions, end-of-chapter exercises appear for all chapters.

From the reviews of the Third Edition:

“… this very well-written book is a classic textbook in Optimization. It should be present in the bookcase of each student, researcher, and specialist from the host of disciplines from which practical optimization applications are drawn.” (Jean-Jacques Strodiot, Zentralblatt MATH, Vol. 1207, 2011)

He served as Technical Assistant to the President’s Science Advisor in 1971-72, was Guest Professor at the Technical University of Denmark (1986), Visiting Professor of the Massachusetts Institute of Technology (1976), and served as Department Chairman at Stanford (1980-1991).

His awards include: Member of the National Academy of Engineering (2008), the Bode Lecture Prize of the Control Systems Society (1990), the Oldenburger Medal of the American Society of Mechanical Engineers (1995), and the Expository Writing Award of the Institute of Operations Research and Management Science (1999).  He is a Fellow of the Institute of Electrical and Electronic Engineers (since 1975).