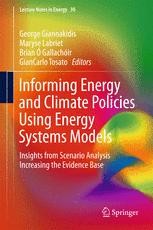 Insights from Scenario Analysis Increasing the Evidence Base

This book highlights how energy-system models are used to underpin and support energy and climate mitigation policy decisions at national, multi-country and global levels. It brings together, for the first time in one volume, a range of methodological approaches and case studies of good modeling practice on a national and international scale from the IEA-ETSAP energy technology initiative. It provides insights for the reader into the rich and varied applications of energy-system models and the underlying methodologies and policy questions they can address. The book demonstrates how these models are used to answer complex policy questions, including those relating to energy security, climate change mitigation and the optimal allocation of energy resources. It will appeal to energy engineers and technology specialists looking for a rationale for innovation in the field of energy technologies and insights into their evolving costs and benefits. Energy economists will gain an understanding of the key future role of energy technologies and policy makers will learn how energy-system modeling teams can provide unique perspectives on national energy and environment challenges. The book is carefully structured into three parts which focus on i) policy decisions that have been underpinned by energy-system models, ii) specific aspects of supply and end-use sector modeling, including technology learning and behavior and iii) how additional insights can be gained from linking energy-system models with other models. The chapters elucidate key methodological features backed up with concrete applications. The book demonstrates the high degree of flexibility of the modeling tools used to represent extremely different energy systems, from national to global levels.

George Giannakidis holds a Mechanical Engineering Degree (1989) from the Aristotle University of Thessaloniki and a PhD in Computational Fluid Dynamics (1993) from Imperial College, University of London. Between 1997 and 2006 he was a senior consultant in the Centre for Renewable Energy Sources and Saving in Greece and since 2006 he is the Head of the Laboratory for Energy Systems Analysis. His scientific interests include energy systems analysis, energy economics and energy policy. He is in particular interested in the evaluation of the necessary energy policies for large scale penetration of renewable energies. He has participated as a project partner and coordinator in a number of EU funded projects on energy planning and renewable energy sources penetration into the energy system. He has also participated in the formulation of the Greek National Action Plans for energy efficiency, cogeneration of heat and power and renewable energy sources. Since January 2013 he is representing CRES as the Operating Agent of the Energy Technology Systems Analysis Implementing Agreement (ETSAP). He is the author of more than 25 publications related to his scientific interests.

Maryse Labriet has worked as environment/energy consultant and researcher for 20 years, with experience in research and consultancy in Canada, Europe, Africa, Central America. She now works as director of Eneris Environment Energy Consultants s.l., based in Spain. She is an engineer (France, 1991) and holds a PhD in Environmental Sciences (Canada, 2004). She has developed a comprehensive knowledge and expertise in two complementary areas: the development and application of integrated energy models to support climate and energy decision-making at national, regional and global levels; the assessment and promotion of sustainable low carbon and climate resilient energy policies, especially in the context of international cooperation. Maryse Labriet actively participated in several European Union and international research projects, collaborating with research groups, international institutions and ONGs, sharing the same desire to contribute to a more sustainable and equitable World. She is member of the Energy Technology Systems Analysis Programme (ETSAP). She is faculty lecturer at the School for Industrial Organization (EOI-Madrid, International Master on Sustainable Management and Corporate Responsibility) and associate member of the Group for Research in Decision Analysis (GERAD, Canada).

Brian Ó Gallachóir is a senior lecturer in energy engineering and leads a research group in energy policy and modelling in University College Cork. His research focus is on energy modelling, including energy systems modelling with TIMES, power systems modelling with PLEXOS and sectoral energy demand modelling with ArDEM, CarSTOCK and LEAP. His research is used to inform energy and climate policy decisions. Brian is chair of the Executive Committee of the IEA Implementing Agreement on energy systems modelling (ETSAP), is on the Steering Committee of Energy Cork and a member of Ireland's Gas Innovation Group. Brian co-ordinates of UCC's taught Masters Programme (MEngSc) in Sustainable Energy and is co-instigator of UCC's BE Degree in Energy Engineering. An applied sciences graduate of Dublin Institute of Technology, Brian moved to Cork in 1990 to carry out a Doctoral research programme in ocean wave energy hydrodynamics. From 1995 - 1998, Brian was Technical Manager of the Renewable Energy Information Office of Sustainable Energy Authority of Ireland. Between 2000 and 2011, Brian was also a Strategic Advisor to Sustainable Energy Authority of Ireland's Energy Policy Statistical Support Unit. GianCarlo Tosato is a senior energy technology system analyst. He has worked for thirty five years at energy modelling and analysis in private companies and public organizations, domestically and internationally. Since February 2002, he is Project Head of the Implementing Agreement on the Energy Technology Systems Analysis Programme (ETSAP) within the framework of the International Energy Agency (IEA). He provides advice in carrying out global and multi-regional technical-economic energy analysis. He made direct contributions in developing energy system models and analysis of European countries and regions as well as in analysing the energy system and prospects of emerging countries with key role in the world energy supply (e.g. Kazakhstan). Mr. Tosato actively participated in several European Union and international research projects. Mr Tosato’s past employments and responsibilities include: the European Fusion Development Agreement (Max Plank Institute fur Plasma Physik – Garching, Germany) where he was the leader of the Social-Economic Office; the Energy Information Administration (Washington DC, US) where he coordinated the implementation of the new EIA energy model; the Italian Energy Agency (ENEA) where he was the head of the Energy Strategies Office. Other employments include CESEN-Ansaldo (Genoa, Italy), ENI (Rome, Italy) and KFZ (Juelich, Germany). Mr Tosato is author of number of reports, papers, articles and books. He currently operates as an independent consultant with his own company ASATREM s.r.l.