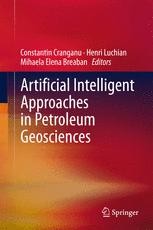 This book presents several intelligent approaches for tackling and solving challenging practical problems facing those in the petroleum geosciences and petroleum industry. Written by experienced academics, this book offers state-of-the-art working examples and provides the reader with exposure to the latest developments in the field of intelligent methods applied to oil and gas research, exploration and production. It also analyzes the strengths and weaknesses of each method presented using benchmarking, whilst also emphasizing essential parameters such as robustness, accuracy, speed of convergence, computer time, overlearning and the role of normalization. The intelligent approaches presented include artificial neural networks, fuzzy logic, active learning method, genetic algorithms and support vector machines, amongst others.

Integration, handling data of immense size and uncertainty, and dealing with risk management are among crucial issues in petroleum geosciences. The problems we have to solve in this domain are becoming too complex to rely on a single discipline for effective solutions and the costs associated with poor predictions (e.g. dry holes) increase. Therefore, there is a need to establish a new approach aimed at proper integration of disciplines (such as petroleum engineering, geology, geophysics and geochemistry), data fusion, risk reduction and uncertainty management. These intelligent techniques can be used for uncertainty analysis, risk assessment, data fusion and mining, data analysis and interpretation, and knowledge discovery, from diverse data such as 3-D seismic, geological data, well logging, and production data. This book is intended for petroleum scientists, data miners, data scientists and professionals and post-graduate students involved in petroleum industry.

Mihaela Elena Breabăn is an Associate Professor at the Faculty of Computer Science, “Alexandru Ioan Cuza” University of Iași, Romania. She is teaching Databases and topics in Probabilities and Statistics, Data Mining and Natural Computing. She obtained her PhD in 2011 from Al.I.Cuza University with a thesis on unsupervised data analysis focused on clustering and feature selection. Post-doctoral research she conducted during Oct. 2011-Mar.2013 was focused on the subject of feature extraction. She conducted research periods at the National University of Seoul (2008), University of Massachusetts at Boston (2010), University of Coimbra (2012) and Goldsmiths University (UK, 2013). She was member in several research projects (CNCSIS-A national grant, CNCSIS-PNII 11-028/2007 partnership among national universities, PN-II-ID-JRP-2011 ERA NET-CHIST-ERA international partnership) and director of a national research project (CNCSIS PN-II-RU-TD-198). She was awarded a doctoral scholarship by participating in a national competition (CNCSIS-BD). She is member of the program committees of several conferences in the field of Computer Science. She is member of the organizing committee of the international doctoral summer school ECODAM.

Henri Luchian is a Professor of Computer Science at ”Alexandru Ioan Cuza” University of Iasi where he teaches Computer Architecture, Data Mining and Natural Computing.
He is a Vice-rector of the “Alexandru Ioan Cuza” University since 2004. He received his PhD in Mathematics/Computer Science in 1994 from "Babes-Bolyai" University of Cluj-Napoca. Result of his rich research activity, he gave several invited talks: University of Sapporo (2013), University of Tokyo (2010), University of Edinburgh (2010), Athens University of Economy and Business (2005), National University of Singapore (September 2003), University of Perugia (May-June 2002), University of Konstanz (June-July 2001), Universite des Sciences et Technologies de Lille (June 1999), University of Sheffield (April 1999), Rijksuniversiteit Groningen, (September 1998), Universitat Konstanz (July 1998), Universite Aix-Marseille II, Marseille (July 1997). He is member of the scientific committees of prestigious evolutionary computing venues: IEEE Transactions on Evolutionary Computing, IEEE Transactions on Data and Knowledge Engineering, IEEE Conference on Evolutionary Computation - since 1995, Parallel Problem Solving form Nature - since 1998. He is the director of the international summer-school on EVOLUTIONARY COMPUTING IN OPTIMIZATION AND DATA MINING organized every year in Iasi. Papers of Henri Luchian have been cited in:
Z. Michalewicz, Genetic Algorithms + Data Structures = Evolutionary Programs, Springer Verlag, 2nd edition – 1994 , page 257; 3rd edition – 1996. T. Back, D. Fogel, Z. Michalewicz, The Handbook of Evolutionary Computation, IOP Publishing - Oxford University Press, 1997 as well as in many papers published in prestigious journals (including Science) and conference proceedings.

“The book 'Artificial Intelligent Approaches in Petroleum Geosciences' is a comprehensive presentation on the basic methods and approaches for surveying, measuring and monitoring geoscience and petroleum basins. … The graphics in this book are exceptional, in color and aid the readers greatly. … directed specifically to high-level modellers and analysis professionals, advanced students will understand the discussion and methods through text.” (Jeff Thurston, 3dvisworld.com, May, 2015)