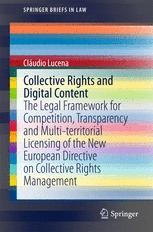 The Legal Framework for Competition, Transparency and Multi-territorial Licensing of the New European Directive on Collective Rights Management

This book starts with an exercise, proposing a theoretical reflection on the technological path that, over time, has transformed the ways we produce, consume and manage intellectual content subject to copyright protection. This lays the groundwork for a further analysis of the main legal aspects of the new European Directive, its improvements, its tendencies and its points of controversy, with special and more concrete attention to how it proposes to address the issues of competition, transparency and multi-territorial licensing.

Digital technologies, networks and communication have boosted the production and distribution of intellectual content. These activities are based on a renewable and infinite resource – creativity – which turns this content into strategic artistic, cultural, social, economic and informational assets. Managing the rights and obligations that emerge in this system has never been an easy task; managing them collectively, which is more often than not the case, adds even more complexity.

The European Directive on collective management of copyright and related rights and multi-territorial licensing of rights in musical works for online use in the internal market is a policy initiative that seeks to establish an adequate legal framework for the collective management of authors’ rights in a digital environment, recognizing this goal as crucial to achieving a fully integrated Single Market. Part of the Digital Agenda for Europe, it is an effort to promote simplification and to enhance the efficiency of collective rights management by tackling three of the main issues that are currently undermining the business model of collecting societies: competition, transparency and multi-territorial licensing.

The book is intended to support students, academics and practitioners by enhancing their general and legal grasp of these phenomena, while also encouraging their collaboration with policymakers and other interested parties in the ongoing task of transposing the Directive into concrete national legislation.

Attorney-at-law registered in Brazil, with over 10 years of experience in consulting and litigation in aspects concerning the digital environment and internet-related issues, but also in the areas of tort liability, contracts, consumer law, copyright, competition, media, entertainment law and freedom of speech. Former member of the Brazilian BAR's Information Technology Committee.

Member of the Faculties' Fundamental Rights, Information and Communication Technologies research group and coordinator of the lines of study which develop works in areas like lawsuit automation systems and the impact of ICTs over Law. Conducted round table discussions during the European Conference on EGovernment Conference (ECEG 2011), South Africa Lex Informatica, Latin American Conferences on ICT Law and published in prominent specialized websites like Consultor Juridico and elDial, magazines like Consulex and Journals like IRIS and LEFIS. Current member of the group of scholars in charge of proposing reforms to the Brazilian Civil Procedure Code, regarding lawsuit automation mechanisms.

Recently joined the European Centre for Information Policy and Security (ECIPS), an organization that researches and develops initiatives and policy formations to combat new emerging security threats for both governments & corporations. In the legal team of the think tank, collaborates in cyber security and digital crime fighting and prevention projects.
Show all