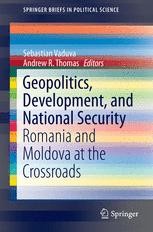 Romania and Moldova at the Crossroads

This volume focuses on the spotlight on Romania and Moldova, two distinct nations that share a common language, history and culture. Romania is a NATO member since 2004 and a fully integrated nation into the European Union since 2007, while The Republic of Moldova (a former Soviet republic) is attempting to join both international organizations for security and development reasons.

Ever since the Iron Curtain fell on Europe at the end of World War II, the term “Eastern Europe” has been used without much regard for the diversity of the region. Given the geographical proximity, perhaps this is an understandable error. However, moving forward into the twenty-first century, and considering the highly sensitive geopolitical, security and development issues playing out in the region, we believe each nation should be treated with the unique distinction it deserves.

Building a mosaic of the most current research, practical application, and policy, the authors, who represent unique, insider perspectives, cover a range of emerging and timely topics from Black Sea security to cultural analyses, organizational development and risk assessment shedding light on social, political and economic challenges of rapid transition in the region, while considering the implications for research, practice and policy in other front-line regions around the world.

Dr. Sebastian A. Văduva is the current Dean of the Griffiths School of Management at the Emanuel University in Oradea, Romania, as well as a management scholar with numerous active ties, academic and entrepreneurial, in both Europe and the United States. He has developed various seminars on leadership and effective management on both micro- and macro-economic levels and is behind several programs intended to boost Romanian economy by drawing in international investors and business partners.

Dr. Thomas has conducted business in 120 countries on a seven continents. A New York Times bestselling author, his books include Aviation Security Management: A Three Volume Set, Air Rage: Crisis in the Skies and Aviation Insecurity: The New Challenges of Air Travel. He is founding Editor-in-Chief of the Journal of Transportation Security. Often featured on Fox News, MSNBC, CNN, ABC, and other media outlets, he lectures on supply chain security issues around the world.