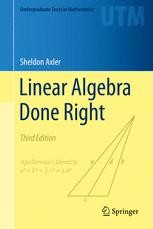 This best-selling textbook for a second course in linear algebra is aimed at undergrad math majors and graduate students. The novel approach taken here banishes determinants to the end of the book. The text focuses on the central goal of linear algebra: understanding the structure of linear operators on finite-dimensional vector spaces. The author has taken unusual care to motivate concepts and to simplify proofs. A variety of interesting exercises in each chapter helps students understand and manipulate the objects of linear algebra.

The third edition contains major improvements and revisions throughout the book. More than 300 new exercises have been added since the previous edition. Many new examples have been added to illustrate the key ideas of linear algebra. New topics covered in the book include product spaces, quotient spaces, and dual spaces. Beautiful new formatting creates pages with an unusually pleasant appearance in both print and electronic versions.

No prerequisites are assumed other than the usual demand for suitable mathematical maturity. Thus the text starts by discussing vector spaces, linear independence, span, basis, and dimension. The book then deals with linear maps, eigenvalues, and eigenvectors. Inner-product spaces are introduced, leading to the finite-dimensional spectral theorem and its consequences. Generalized eigenvectors are then used to provide insight into the structure of a linear operator.

Sheldon Axler is Dean of the College of Science & Engineering at San Francisco State University.  He has authored many well-received books including Precalculus: A Prelude to Calculus, Algebra & Trigonometry, College Algebra, A Glimpse at Hilbert Space Operators, Harmonic Function Theory, and Holomorphic Spaces.

“This is the third edition of this well-known introduction to linear algebra. The main changes, apart from the usual improvements during a new edition, are the number of exercises which has more than doubled, new formatting including color printing, new sections on product spaces, quotient spaces, duality, and the chapter on ‘Operators on Real Vector Spaces’ … . if you liked the previous editions, you will like this new edition even better!” (G. Teschl, Monatshefte für Mathematik, 2016)

“This third edition, appearing eighteen years after the second edition, is a further polishing of the existing approach. This book was and still is an interesting and useful text for a second course in linear algebra, concentrating on proofs after the concepts and mechanics have been covered in a first course.” (Allen Stenger, MAA Reviews, maa.org, May, 2016)

AMERICAN MATHEMATICAL MONTHLY
"The determinant-free proofs are elegant and intuitive."

CHOICE
"Every discipline of higher mathematics evinces the profound importance of linear algebra in some way, either for the power derived from its techniques or the inspiration offered by its concepts. Axler demotes determinants (usually quite a central technique in the finite dimensional setting, though marginal in infinite dimensions) to a minor role. To so consistently do without determinants constitutes a tour de forces in the service of simplicity and clarity; these are also well served by the general precision of Axler’s prose. Students with a view towards applied mathematics, analysis, or operator theory will be well served. The most original linear algebra book to appear in years, it certainly belongs in every undergraduate library."

ZENTRALBLATT MATH
"Altogether, the text is a didactic masterpiece."

"Clarity through examples is emphasized … the text is ideal for class exercises … I congratulate the author and the publisher for a well-produced textbook on linear algebra."