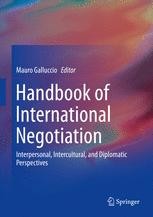 This book reinforces the foundation of a new field of studies and research in the intersection between social sciences and specifically between political science, international relations, diplomacy, psychotherapy, and social-cognitive psychology. It seeks to promote a coherent and comprehensive approach to international negotiation from a multidisciplinary viewpoint generating a longer term of studies, researches, and networking process that both respond to changes and differences in our societies and to the unprecedented demand and opportunities for international conflict prevention and resolution. There is a need to increase cooperation, coherence, and efficiency of international negotiation. It is necessary to focus our shared attention on new ways to better formulate integrated and sustainable negotiating strategies for conflict resolution. This book acquires innovative relevance in and will impact on the new context of international challenges which do not have a one-off solution that can be settled through a single target-oriented negotiation process. The book brings together leading scholars and researchers into the field from different disciplines, diplomats, politicians, senior officials, and even a Cardinal of the Holy See to give their contributions and make proposals on how best to optimize the use of negotiation and diplomacy structures, tools, and instruments. However, unlike most studies and researches on international negotiation, this book emphasizes processes, not simply outcomes or even tools but the way in which tools are and can be used to achieve better outcomes in international reality-based negotiation.

Mauro Galluccio received his PhD in Political Science from the Free University of Brussels, Belgium. He is the President of the European Association for Negotiation and Mediation (EANAM), based in Brussels. Dr. Galluccio studied for a long time in Italy and has a degree in both political sciences and psychological sciences and techniques for the persons and the community. He has given many speeches, presented numerous papers and symposia at international conferences and congresses on the subject of International Relations, with a particular interest in the application of cognitive-behavioral psychotherapy principles to the field of political sciences. As lecturer on behalf of the Directorate-General Communication of the European Commission he gives conferences to many International Universities, enterprises, and national administrations from different Countries. Dr. Galluccio has worked within the European institutional framework as political analyst and adviser. He was political coordinator at the Directorate-General of the European Commission for Development and Relations with African, Caribbean and Pacific States. Previously he was Spokesman to the President of COPA and coordinator of the Crisis Management Unit at the COPA-COGECA. Among Dr. Galluccio’s research interests are those on applied cognitive psychology and psychotherapy; interpersonal negotiations; specific training for negotiators and politicians; preventive diplomacy and conflict resolution; Common Foreign and Security Policy for the European Union; the European Union internal negotiation processes and institutional external communication. He is coauthor of Psychological processes in international negotiations: theoretical and practical perspectives (with F. Aquilar, New York, 2008).

“A must read for all who wish to take part in managing international affairs in our complex and nervous world. The editor and author Galluccio, a political scientist as well as a psychologist, has been able to provide us with a unique and penetrating insight into the political and socio-cognitive world of international negotiation. Contributors to this remarkable book offer a penetrating analysis of the dual nature of negotiation - as a human and diplomatic experience. Their work opens a path to understanding negotiation as the way to building trust and the will to agree, the two key conditions for any negotiation to succeed.”
Danilo Türk
Former President of Slovenia
Former UN Assistant-Secretary-General for Political Affairs”

“It has become only too evident that traditional methods of conflict prevention and resolution are no longer adequate or effective. This is why editor and contributor Mauro Galluccio’s present volume appears to fill in an existing and ever more visible void in shaping an entirely new approach in modern-day diplomacy. The significance of this book can hardly be over-rated. It offers an entirely new political and psychological angle to transforming conflict by managing interpersonal dynamics and tailoring preventive behaviors. It alerts us to the crucial role of the mental heritage of conflicts and powerful emotions. In brief, it enhances an entirely new type of negotiation as a fundamental tool of managing, preventing and resolving conflict by acknowledging the diversity of mental viewpoints about any given reality.
This volume can indeed serve as a handbook to practitioners – diplomats and decision-makers – in educating themselves, in reshaping their own outlook and even bettering themselves as individuals in positions of authority and responsibility for bringing positive change to the lives of millions of people.”
Elena Poptodorova
Ambassador of Bulgaria to the United States

"Galluccio has brought together a distinguished and diverse group of scholars and practitioners to address an enduring, if evolving, challenge to human well-being: violent conflict between nations and sub-national groups.  His aim is to organize the interdisciplinary character of the research, on which the authors draw, into coherent perspectives on the causes of conflicts and potentially effective interventions designed to prevent and resolve them.
There is much that is new here. Perhaps most important, there is a focus on the personal and emotional character of conflict -- for those who engage in it and those who intervene to mitigate it.  The passion, competence, and intensity that Galluccio brings to this edited volume is striking and appropriate, in light of the importance of the topic to those who have been or will be victims of violent conflict, but at no point does it detract from the intellectual rigor that characterizes the entire volume."
Robert L. Gallucci,
U.S. Ambassador at Large
President of the MacArthur Foundation
Former US Assistant Secretary of State

"This timely volume and the work of Dr. Mauro Galluccio on international negotiation and mediation is extremely relevant in the current climate of conflict throughout the world and the potential perils that presently exist among nations. This collection of essays by renowned scholars, foreign policy experts, officials, psychologists and other practitioners, ably assembled and edited by Dr. Mauro Galluccio, is so very welcome. This handbook highlights the complexity, and difficulty, of international negotiations.  Fortunately, it also provides important and useful tools for those responsible for conducting diplomacy with terrorists and insurgents.  It is sure to be widely read, cited and used as a valuable reference work for years to come."
Mitchel Reiss
President of The Colonial Williamsburg Foundation
Past President's Special Envoy to the Northern Ireland Peace Process
Former Director of Policy Planning at the US State Department

"Dr. Galluccio's work on conflict resolution and peace negotiations represents an international and multidisciplinary attempt showing us that the best way to advance research lies in interdisciplinary cross fertilization. The challenge is to find ways to coordinate psychological expertise with the expertise afforded through other disciplinary perspectives and in my strong opinion Dr. Galluccio's work and this volume match high expectations."
Agostino Miozzo
Managing Director of the Crisis response Department
The European External Action Service of the European Union

"I wish to pay tribute to the editor of this book, Mauro Galluccio, a former staff member, who has invested now more than two decades in providing an ever wider and deeper insight in the multi-disciplinarity of international negotiations. It is my opinion that Galluccio’s book is timely in light of the current climate of conflict among the nations throughout the world and the potential perils that presently exist among nations.  It is quite fitting, in my opinion, that a proposal for the further development of a social-cognitive approach to negotiation and mediation would be of great value in facilitating effective agreements between various nations in the interest of achieving international peace."
Koos RICHELLE
Former Director General
European Commission of the European Union

"I enthusiastically acknowledge Dr. Galluccio's efforts towards the realization of this book. If many political science studies look into the art of negotiations, only few provide students and practitioners with such a deep psychological view. I congratulate Dr Galluccio for the passion and dedication he showed towards political and psychological sciences and their application to conflict resolution. I am sure that many practitioners will find this volume very relevant and extremely useful. I certainly found it fascinating."
Alberto Oggero (excerpt from the foreword)
Deputy EU Special Representative for the Middle East Peace Process

"Few are better placed to bring together this extraordinary roster of contributors than Dr. Mauro Galluccio. In an era where seasoned negotiators are always in short supply, and where negotiation techniques are too often compartmentalized, this volume is a breath of fresh air."
Dr. Abiodun Williams (excerpt from the foreword)
President, The Hague Institute for Global Justice

"This is a timely and extremely valuable multidisciplinary volume edited by Mauro Galluccio, who since the early 1990s has been instrumental in promoting conflict resolution and transformation.  In this text, the contributors have highlighted a number of important aspects of the peace negotiation process from various disciplines which include cognitive and motivational factors, as well as emotional regulation. This book is a very intuitive contribution to the literature which aims to formulate proposals on how to best optimize the use of negotiation and diplomacy structures throughout training programs."  Frank Dattilio, PH.D., ABPP (excerpt from the foreword)
Harvard Medical School