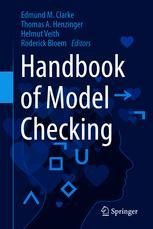 Model checking is a computer-assisted method for the analysis of dynamical systems that can be modeled by state-transition systems. Drawing from research traditions in mathematical logic, programming languages, hardware design, and theoretical computer science, model checking is now widely used for the verification of hardware and software in industry.

The editors and authors of this handbook are among the world's leading researchers in this domain, and the 32 contributed chapters present a thorough view of the origin, theory, and application of model checking. In particular, the editors classify the advances in this domain and the chapters of the handbook in terms of two recurrent themes that have driven much of the research agenda: the algorithmic challenge, that is, designing model-checking algorithms that scale to real-life problems; and the modeling challenge, that is, extending the formalism beyond Kripke structures and temporal logic.

The book will be valuable for researchers and graduate students engaged with the development of formal methods and verification tools.

Edmund M. Clarke was Professor Emeritus in the Dept. of Computer Science at Carnegie Mellon University, where he was formerly the FORE Systems Professor. He received his Ph.D. in Computer Science from Cornell University in 1976. With E. Allen Emerson and Joseph Sifakis he received the ACM Turing Award in 2007 for his work on the development of model checking. He cofounded the Computer Aided Verification (CAV) conference, and the journal Formal Methods in Systems Design. Among many honors, he was elected to the US National Academy of Engineering and to the American Academy of Arts and Sciences. His research interests include software and hardware verification and automatic theorem proving.

Thomas A. Henzinger is President of IST Austria (Institute of Science and Technology Austria). He holds a Ph.D. in Computer Science from Stanford University (1991). He has held assistant, associate, and full professorships in Cornell University (1992–95), the University of California, Berkeley (1996–2004), and EPFL in Lausanne, Switzerland (2004-09); he was also Director at the Max Planck Institute for Computer Science in Saarbrücken, Germany (1999). His research focuses on modern systems theory, especially models, algorithms, and tools for the design and verification of reliable software, hardware, and embedded systems. He is an ISI highly cited researcher, a member of Academia Europaea, the German Academy of Sciences (Leopoldina), and the Austrian Academy of Sciences, and a Fellow of the AAAS, ACM, and IEEE. He has received the Milner Award of the Royal Society, the Wittgenstein Award of the Austrian Science Fund, and an ERC Advanced Investigator Grant.

Helmut Veith was a professor in the Faculty of Informatics of Technische Universität Wien, and an adjunct professor at Carnegie Mellon University. He received his PhD (sub auspiciis praesidentis) in Computer Science from TU Wien. He previously held professor positions at TU München and TU Darmstadt. In his research, he applied formal and logical methods to problems in software technology and engineering, focusing on model checking, software verification and testing, embedded software, and computer security. Prof. Veith passed away in 2016 during the final editing on the Handbook.

Roderick Bloem received his PhD from the University of Colorado at Boulder (2001) for work on formal verification using linear temporal logic. He moved to Technische Universität Graz in 2002, where he has been a full professor since 2008. His research interests are in formal methods for the design and verification of digital systems, including hardware, software, and combinations such as embedded systems. He studies applications of game theory to the automatic synthesis of systems from their specifications, connections between temporal logics and omega-automata, model checking, and automatic fault localization and repair.

Show all
Reviews
“This book is invaluable to the Ph.D. students, who like to dive in the field, learn about state-of-the-art techniques and find open problems. It is also helpful to the researchers who like to refresh their memory on a particular model checking technique and get pointers to the further reading.” (Igor Konnov, Formal Aspects of Computing, Vol. 31, 2019)
“The handbook’s target audience is primarily researchers and graduate students who want to master the technical cores of model checking techniques. The text is encyclopedic in scope and provides an extensive treatment of the model checking domain.” (Vitus S.W. Lam, Computing Reviews, May 20, 2019)
“This handbook is an authoritative, comprehensive description of the state of the art in model checking. It belongs on the bookshelf of every researcher and practitioner in computer-aided verification.” (Moshe Y. Vardi, George Distinguished Service Professor in Computational Engineering, Rice University)

“With chapters written by the world’s leading experts from academia and industry, this authoritative book on model checking should be on the shelf of every computer science graduate student and every hardware and software engineer.  As the scale and complexity of digital systems grow, and they must work in the presence of uncertainty in the physical world, verification techniques such as model checking will become increasingly important to ensure system reliability, safety, and security.” (Jeannette Wing, Columbia University)