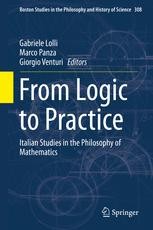 From Logic to Practice

Italian Studies in the Philosophy of Mathematics

This book brings together young researchers from a variety of fields within mathematics, philosophy and logic. It discusses questions that arise in their work, as well as themes and reactions that appear to be similar in different contexts. The book shows that a fairly intensive activity in the philosophy of mathematics is underway, due on the one hand to the disillusionment with respect to traditional answers, on the other to exciting new features of present day mathematics. The book explains how the problem of applicability once again plays a central role in the development of mathematics. It examines how new languages different from the logical ones (mostly figural), are recognized as valid and experimented with and how unifying concepts (structure, category, set) are in competition for those who look at this form of unification. It further shows that traditional philosophies, such as constructivism, while still lively, are no longer only philosophies, but guidelines for research. Finally, the book demonstrates that the search for and validation of new axioms is analyzed with a blend of mathematical historical, philosophical, psychological considerations.

Marco Panza is Research Director at the CNRS and member of the IHPST (CNRS and Univ. of Paris 1 Panthéon Sorbonne). He is the author of several books and papers and the editor of several collective volumes in the domains of history and philosophy of mathematics. For the Boston Studies in the Philosophy of Sciences, he edited, with M. Otte, Analysis and sinthesis in Mathematics. History and Philosophy (1997). His books include: Newton et les origines de l'analyse, 1664-1666, Blanchard, Paris, 2005, and Plato's Problem. Introduction to Mathematical Platoinism, Palgrave Mac Millan, Bsingstoke (UK), 2013 (co-authored with Andrea Sereni).

Giorgio Venturi is currently a post-doc at CLE (Campinas) and former PhD student both in philosophy at Scuola Normale Superiore of Pisa, under the supervision of Gabriele Lolli, and in mathematics at the Université Paris Diderot, under the supervision of Boban Velickovic. His main research field is set theory, both from a purely mathematical perspective - he co-authored Velickovic Proper forcing remastered appeared in Appalachian set theory (Cambridge University Press) - and from a philosophical point of view, as in Foundation of mathematics between theory and practice appeared in Philosophia scientae 18(1), 2014.